« D.C. trip leaves little to be desired
Gmail at capacity! »

What a precious Sunday

Let’s hope the second time typing this is the last!

Well, as I was writing, before I restarted my computer and neglected to save, this has been a pretty good weekend. And I mean weekend to include the end of the “work week” as well. Where to begin…

I haven’t gone out in Madison for some time. School and work have kept me generally overwhelmed as has been the case for most of the past eight years. I did go out while in Austin and Washington recently, but that’s about it. So to celebrate the end of another semester, Thursday I went to Plan B for the first time in… weeks? months? It’s been a while in any case. My roommates have gone there almost every Thursday this semester, so it was nice to finally join them instead of working or doing homework while everyone’s having fun. Not that working isn’t fun. I usually love it. But anyway:

Josh P and “the Milwaukee group” (Nicholas M, Eric’s last boyfriend, and his friends Kelly, Caprice and Justin) came to Madison for the evening, so it was great to see him again. It was also great to wear a skinny tie for the first time. Perhaps I’m changing… 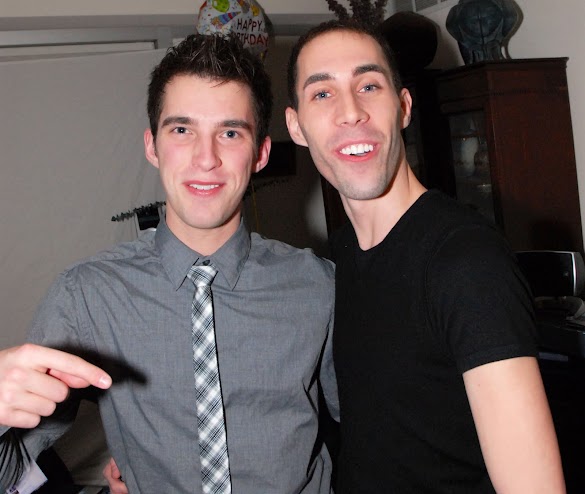 Josh and I really know how to pose.

We took a few more photos, but Josh would have my head were I to post them. 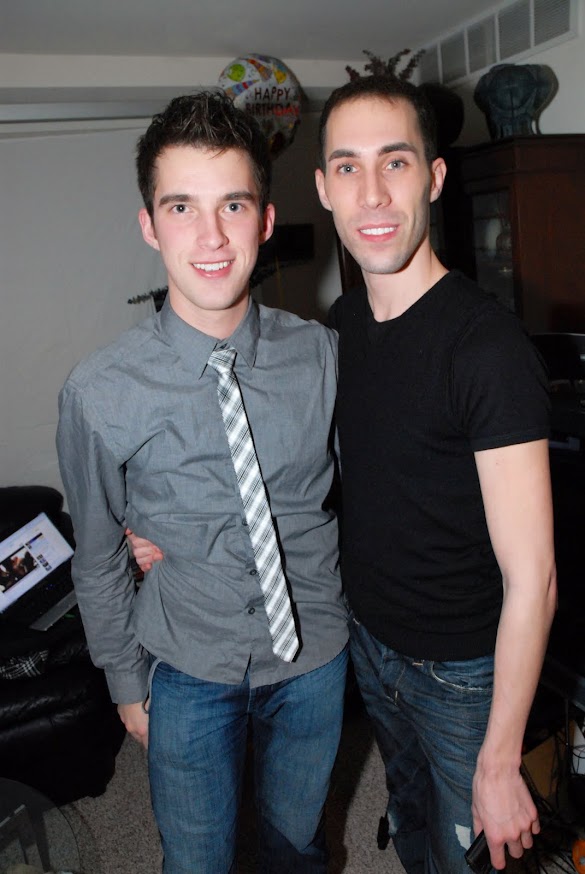 A little better that time, eh?!

Plan B was interesting. The crowd was a bit different than when it first opened. A lot of the old Club 5 regulars were present. I hear Club 5′s not doing very well these days, but I don’t know that firsthand. Anyway, I saw a bunch of people to whom I haven’t talked in a while. I also saw Manoel, who harassed me every few minutes all night to the point I had to beg a bouncer not to kick him out. ‘Twas a good time. 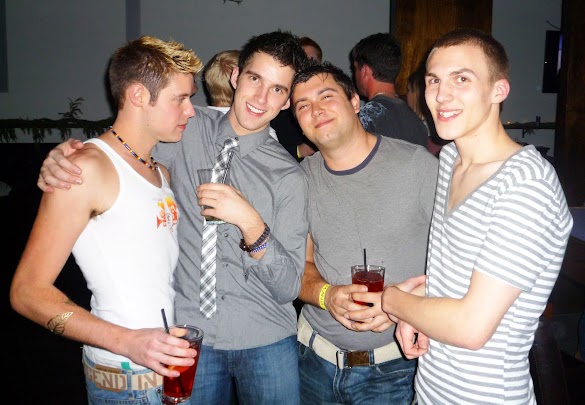 Then Friday night I stayed in studying for a Saturday morning philosophy of religion final. Justin V was in town for his graduation, so he stayed over for the weekend, though I was mostly studying at the Herald overnight. I did come back for some food at 4 a.m. to find everyone awake and a bit drunk, but hey, they didn’t have finals in six hours.

I fell asleep a while at the Herald, but got a good amount of studying in before the exam. I was expecting three questions of the nine provided to be on the final, based on experiences of others who took the class. For some reason six of the questions made it onto the exam, though, including two the teaching assistant admitted weren’t covered in class. “Just try your best.”

Afterward, I thought I did a great job on the first two questions, an OK job on the next two, and the last two, I pretty much had no idea what to write, so I hope the T.A. appreciates short and sweet. I biked home to sleep, finding boys lying all over the place as usual. Justin woke up and we started talking, and then eventually we all decided to eat at Mediterranean Cafe instead of letting me sleep. I wasn’t tired for some reason anyway, so it was OK.

I think I slept after that, and then Saturday night, we all went to the Big Gay Christmas Party at Plan B. Ericka S and Angela C came with Eric, Ryan and me. The club was pretty packed. Manoel apologized to me and largely left me alone. Several “go-go” dancers were on large, black boxes, though by direct inquiry I determined at least two of them were straight, unfortunately. One asked me to add him on Facebook, though he only told me his name was Shawn. That helps. I’m sure there aren’t very many of those.

Ericka introduced me to a cardiology resident at UW Hospital, and a really nice, really drunk woman who claimed to be older than she looked bought me some Jager bombs. I also left without closing my tab. Oops.

We ended up giving new lawyer friend Chris G a ride back downtown, and then I awaited Anthony’s supposed arrival. I don’t remember why he didn’t just come with us; things tend to get a little confused at the end of these nights.

Eventually he came over, though, as did Ryan and Justin after going to get burritos, and everyone went to bed sometime around 4 a.m.
We woke up around noon, Justin got ready to graduate, and we contemplated seeing a movie.

Everyone wanted to see Precious. By their description, I thought it’d be stupid. Perhaps that judgment was mostly due to the people who wanted to see it, but anyway, I had low expectations. The trailer raised them, a bit. 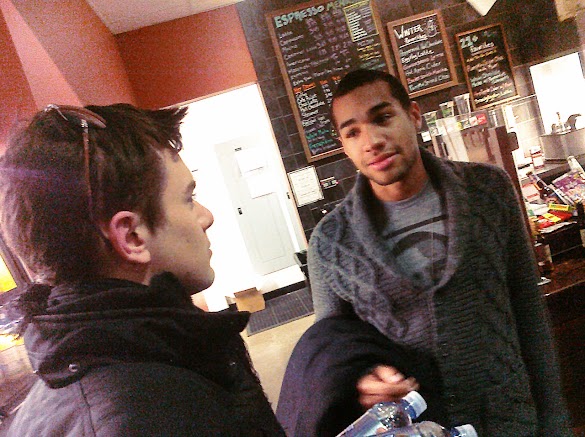 Anthony and Nicc at Sundance 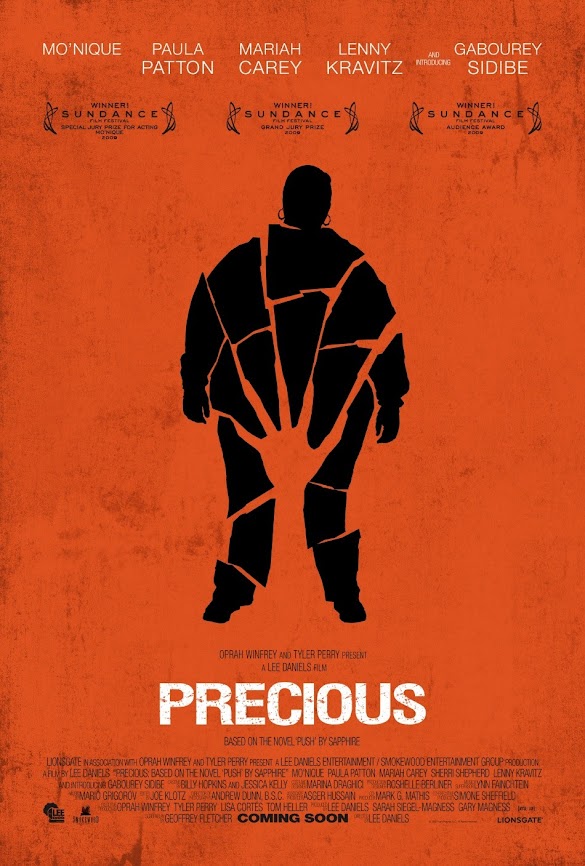 It was actually quite good, especially the second half. It got pretty intense and emotional, and is definitely worth seeing. After the movie, we walked over to Anthopologie, a store I’d never heard of, but it was pretty great. It was the exact atmosphere I’d picture my sister making if she owned a store. Earthy. Environmental. Eccentric. A lot of random stuff, such as a tall spinner rack of door handles. I bought a large hourglass. Anthony lay on a bed. 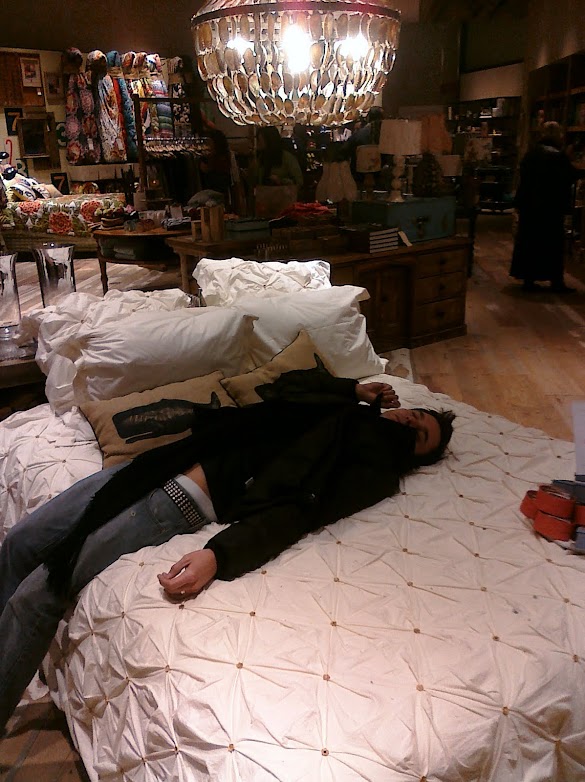 After that, we walked to Flat Top Grill, a restaurant that’d been recommended to me many times but to which I’d never been. It was a lot of fun. You go up to a salad bar type thing and fill a bowl with all sorts of ingredients to be stir fried. You add vegetables, meats, sauces… and you add colored plastic sticks to indicate if you want flat bread, tofu or eggs added. Then they bring the results to your table. It was delicious and very economical. Before 5 p.m., you get a huge bowl for $7.49, or unlimited bowls for $9. After 5 p.m., it’s just $10 for unlimited bowls if you’re a student. Amazing! I wish we had one of those downtown!

Full, we went to T.J. Maxx and shopped for too long. I bought two large pillows, pillowcases, scarves and another hourglass. How random? After that, we went home and watched Clueless to commemorate Brittany Murphy’s sudden, tragic death.

This entry was posted by Charlie Gorichanaz on December 21, 2009 at 9:44 pm, and is filed under Personal. Follow any responses to this post through RSS 2.0.You can leave a response or trackback from your own site.