I started using Google’s Picasa to manage my photos probably two years ago when I learned of its awesome facial recognition feature to largely automate tagging people. Then when I discovered Alan Lundeen‘s plugin to automate uploading to Facebook, life was blissful. 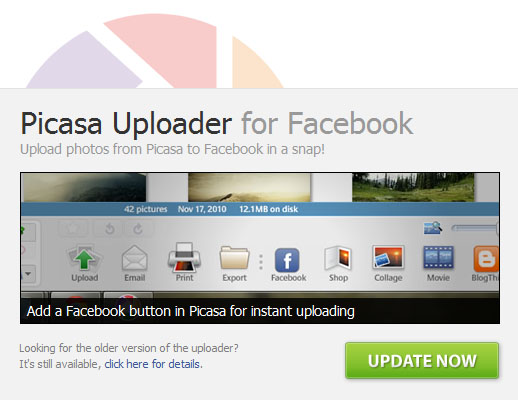 Since then, Facebook has implemented new photo features (as we all know, many of which we all hate), including the ability to download a higher resolution file than what is displayed. The default display resolution has also increased over time.

Till recently, using the Picasa Uploader plugin meant a tradeoff between ease and high quality. Ease always won out in my case. I’m perpetually behind on photo sharing, especially when it comes to this blog, so that decision was easy.

I’d been following a Facebook discussion for some time about updates to the uploader. To my delight, a couple of months ago I noticed a somewhat hard to find update to the uploader:

As an aside, if you’re interested in uploading in high resolution you can try the new desktop version of the uploader:

It should also be a bit faster than the web version.

Cheers,
Alan
about a month ago

This new uploader works fabulously so far. The only problem, which is really annoying, is my photos keep ending up on Facebook in a random order. Then people start going through the album and commenting as I am rearranging the photos… so that’s nonideal, but the photos end up looking much better than if I uploaded them through Facebook, somehow.

This entry was posted by Charlie Gorichanaz on July 20, 2011 at 9:22 pm, and is filed under Web services. Follow any responses to this post through RSS 2.0.You can leave a response or trackback from your own site.