Tuesday night I went to Palermo for my long awaited dinner plans with Juan Manuel and Roberto. I may have guilted Roberto into coming with, but I know he didn’t regret it.

Juan picked out a place called Taco Box for me to try. It was nice, though our waitress really sucked. We ended up giving her exact payment for the bill with no tip, something I couldn’t imagine doing in the States. I walked out quickly without looking back.

Then we went back to Roberto’s and hung out, watching many of my videos and just generally stalking me in my presence. We looked at my blog, my photos, my Twitter. Felt odd, but it was flattering. And it was a great opportunity to reflect on my past and upbringing, and to get to know Juan Manuel and Roberto better. I like them both quite a bit; hopefully I can catch up with them when they visit the States sometime!

We talked a lot about relationships. Specifically, we talked about my history, and the current situation I have with Bo. Roberto was trying to draw connections between my family situation and my life after moving out (and then back in). I had never really thought of the impact someone’s family can have on his interactions later in life, but it’s definitely worth considering.

I’m not exactly sure what to make of my history, actually. I have nine siblings, seven of whom are younger. So you’d think I have had a hectic life. And I have. But since I was 10, I spent most of my time working at my mom’s stores. That made me grow up very quickly and taught me to do things for myself, independently. Maybe having many siblings also contributed to that, or perhaps the opposite; I’m not sure.

But anyway, I’ve grown up to be pretty independent, yet the last three years of college I’ve entered increasingly crowded living situations. My freshman year, I had an apartment to myself. By my senior year, I was sharing a bedroom with four other gay guys. And I loved it. Mostly because it was cheap, but I didn’t often mind the camaraderie, either. Of course, there was often drama as well, but I liked having people around. So, was I compensating for something in my childhood? I’m still not sure. 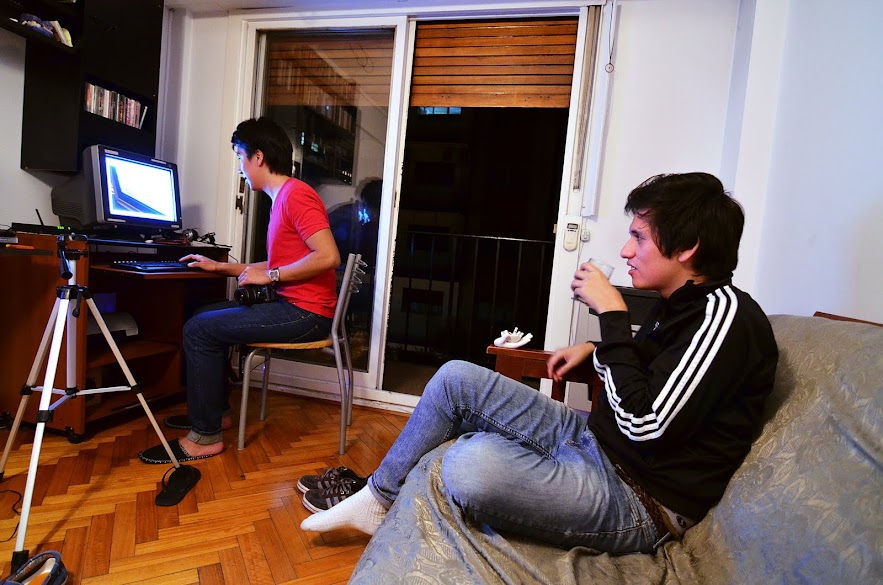 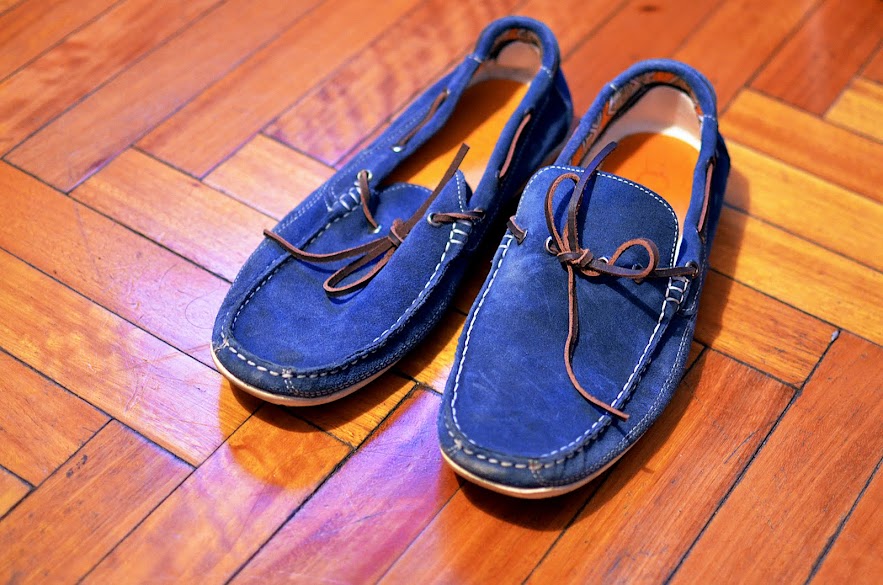 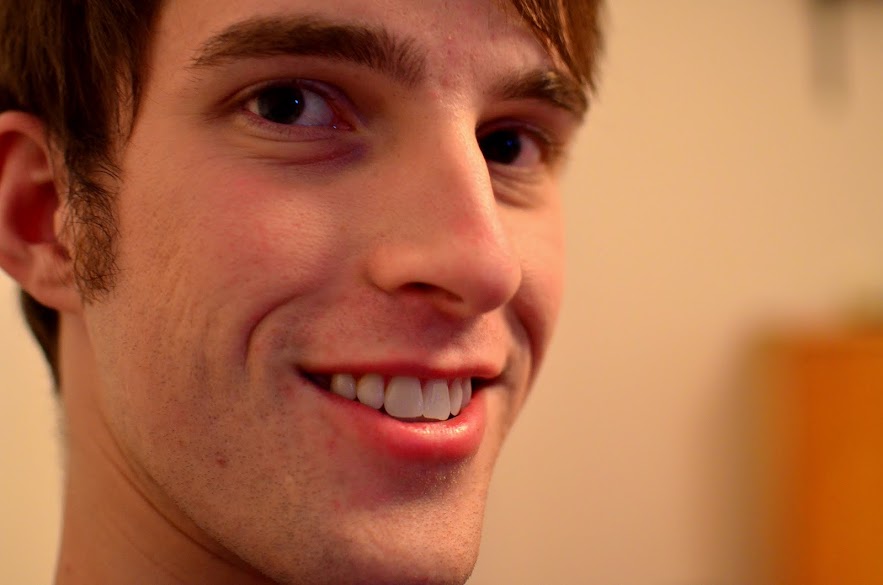 Then came Thursday, possibly my last day in Buenos Aires, as I had plans to go to Tandil with Damian for my last weekend. I spent the day with Dani, though we didn’t do much that day. I planned to bring all my stuff to Palermo that night to say goodbye to Roberto and Juan Manuel and eat with them once more, and then I was going to La Plata that night.

Staying with Dani was an interesting experience; of all my hosts, he spoke the least English. In fact, he spoke almost no English at all, so I had to rely on my Spanish, which was all right. I often was unable to say what I wanted to say, but overall I felt like we really understood each other for the most part. It was actually quite fulfilling! I definitely need to study Spanish more, but I’m glad I knew as much as I knew. 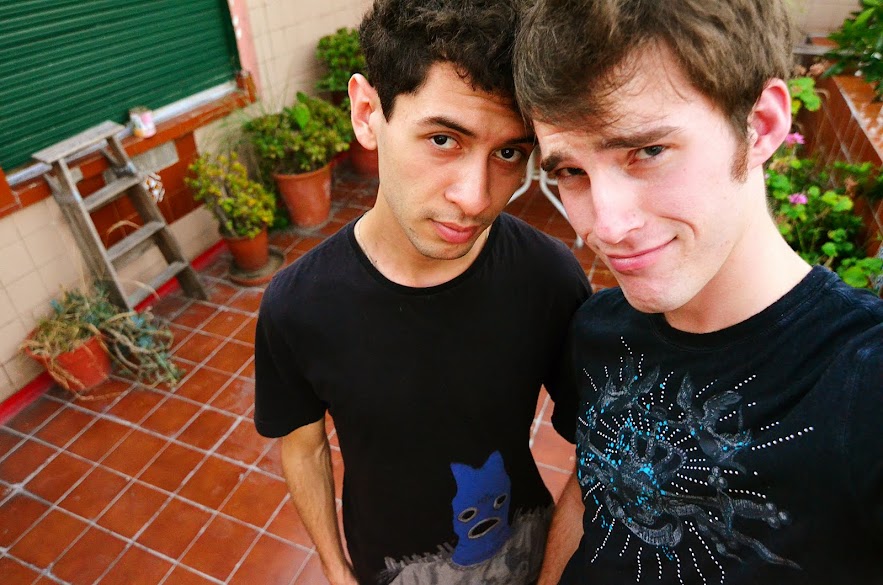 Dani and me, during our last moments together! Oh, no! :-(

So that was that, and we parted ways at the bus stop across from his house. I boarded the No. 41 bus to Palermo, got off at Plaza Italia, and walked to Juan Manuel and Roberto’s apartment. Roberto was sleeping or something when I got there, so I chatted with Juan for a while. Once we were all awake, we discussed what we wanted to eat. We eventually settled on ordering empanadas, though we should have done it sooner, as they arrived an hour after ordering, leaving me little time to scarf them down and run out to the bus stop. 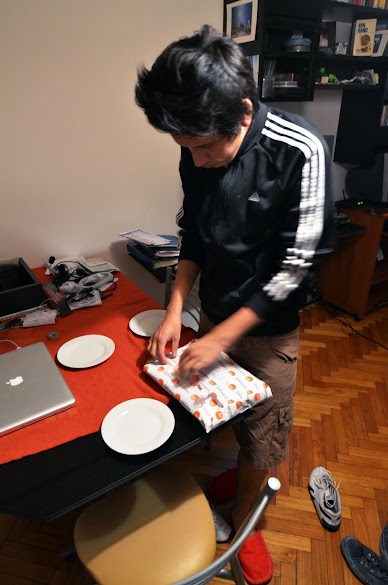 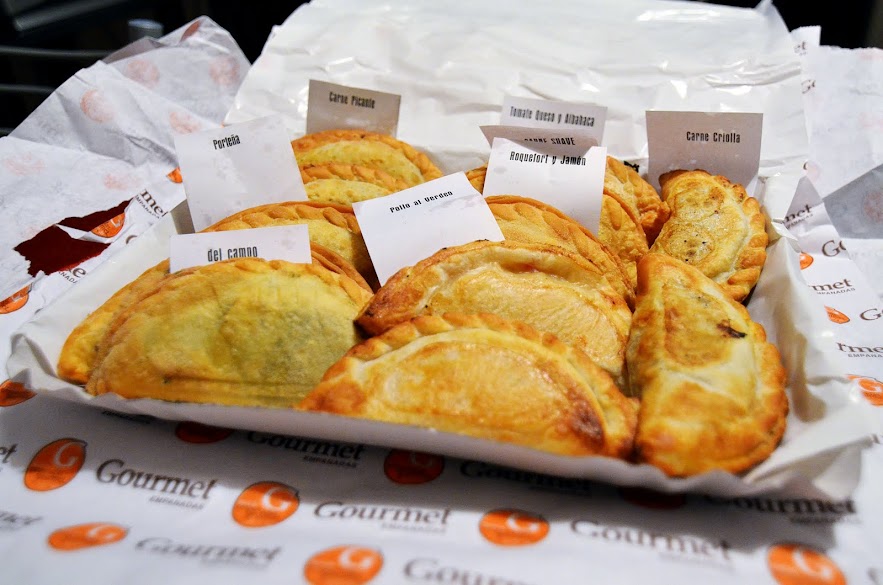 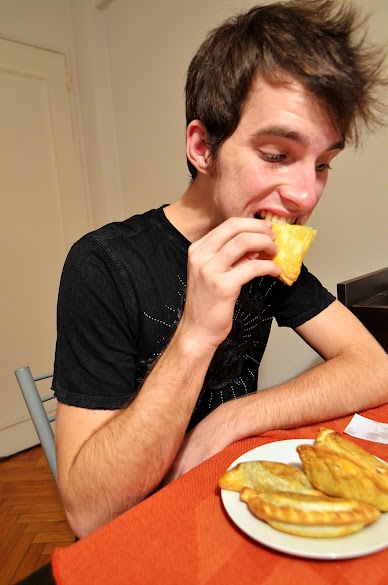 A photo of me, eating, by Roberto

And then, as you might have guessed, that was that. I said goodbye to the two, and Juan walked me out. I headed off into the night and waited at the stop for the bus that would take me to July 9th Avenue. The bus came, I boarded, and exited at just the moment the No. 129 bus to La Plata arrived. How perfect.

This entry was posted by Charlie Gorichanaz on April 1, 2011 at 3:53 am, and is filed under Uncategorized. Follow any responses to this post through RSS 2.0.You can leave a response or trackback from your own site.