Argentines seem to have lots of holidays

Last weekend was the second “long weekend” of my trip, as Thursday and Friday were days off for many people. I wasn’t clear on what the occasion was, but it became clear something was going on Thursday when I tried to make my way to La Plata for the weekend to stay with Damian.

The only place I knew to for sure catch the Plaza bus to La Plata was near the Obelisco, so I took the No. 37 bus from Fernando’s house to Corrientes Avenue. I then expected I could walk east six blocks and hop on the bus. But when I got there, I saw the three main roads that go through downtown Buenos Aires were all closed. And filled with people. What the hell?! The middle road was blanketed with thousands of chairs, clearly in preparation for some speaker or performance.

So I figured the bus must be going down a parallel street, so I walked north toward Retiro Station, where the bus starts, hoping to find a stop before the detour started. I got six blocks north and it appeared the road was closed all the way up. I called Damian, whom I was supposed to be going to visit, and asked him to call the station and find out where I should go. Once he did that, he told me to walk another 10 blocks east to Edward Madero Avenue, where there was supposedly a No. 129 bus stop.

I found the intersection, but spent 20 minutes walking around looking for the stop. Then I saw a 129 bus go by, saw where it stopped and walked over there. And I waited. A bunch of 129s passed, but none of them was the correct one. I needed the La Plata via the autopista (freeway), even though after a while I was considering taking the one that stops all throughout the Centenario neighborhood. I just wanted to get there eventually!

Then I saw it: a 129, clearly the correct one. And someone held out her hand for it to stop. And it drove right by. And the same thing happened for the next one. This girl was obviously trying to get on the same bus as I was, so I indicated to her my frustration. The girl asked another girl, who informed her the bus we needed was not making any stops today for the special occasion, so we had to catch it at Retiro. I asked the girl if she wanted to split a taxi with me, and we did that. She ended up refusing my half of the cash, which was nice. Then we found the bus and boarded, but the driver couldn’t get the SUBE card machine to work. So I got to board for free, again. Nice. 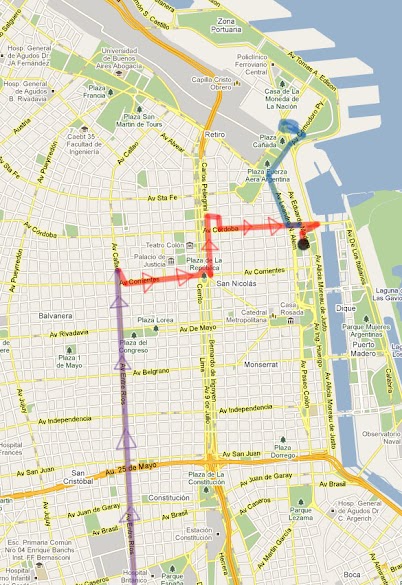 My Thursday expedition in my painfully small shoes with all my belongings (three bags) to find the bus to La Plata: Took the No. 37 (purple) from Lanús to Corrientes, walked (red) to the usual stop seven blocks down, but when the road was closed, I had to guess where it might stop instead... with the help of Damian via phone, I determed the No. 129 should stop at Madero... after two hours there, I took a taxi (blue) with a girl up to Retiro and finally found the bus.

I made it to La Plata at last, and Damian and Puni met me at the station there. We walked the 10 or so blocks to Damian’s apartment, and began our night. We made plans to meet Damian’s friend Matius at a restaurant called Frawen’s. It was pretty good, and not too expensive. I spent about $15 (USD) on some sort of deluxe cheeseburger with steak-like meat and an egg. I also ate some of Puni’s milanesa, of course. 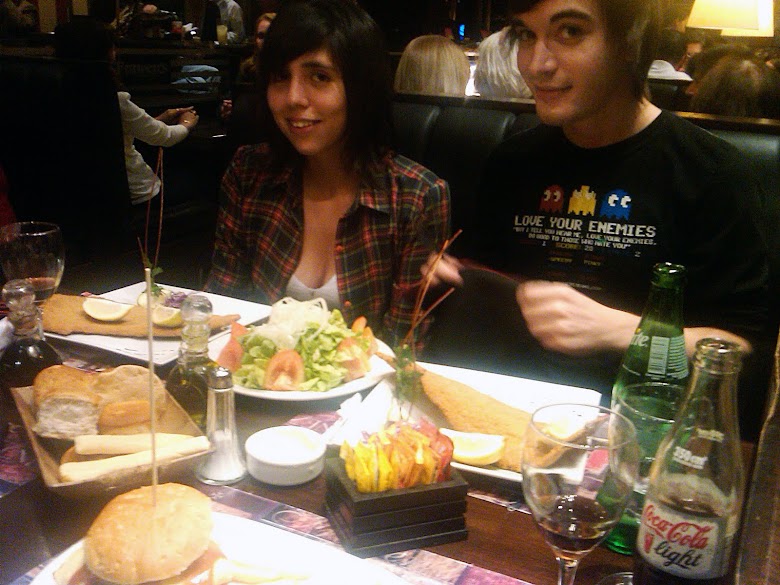 Crappy photo from the BlackBerry, but all I had of Frawens! :-)

Then we went back to Damian’s to drink and smoke a bit, perhaps before going out. We weren’t really sure. But we ended up just staying there all night. I think Matius and Puni left around 4 or 5 a.m. 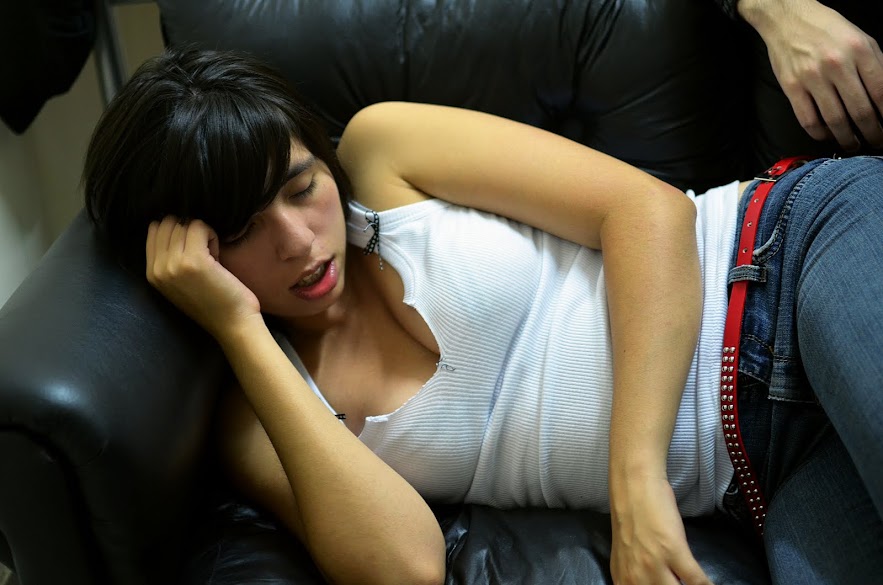 Soledad would kill me... 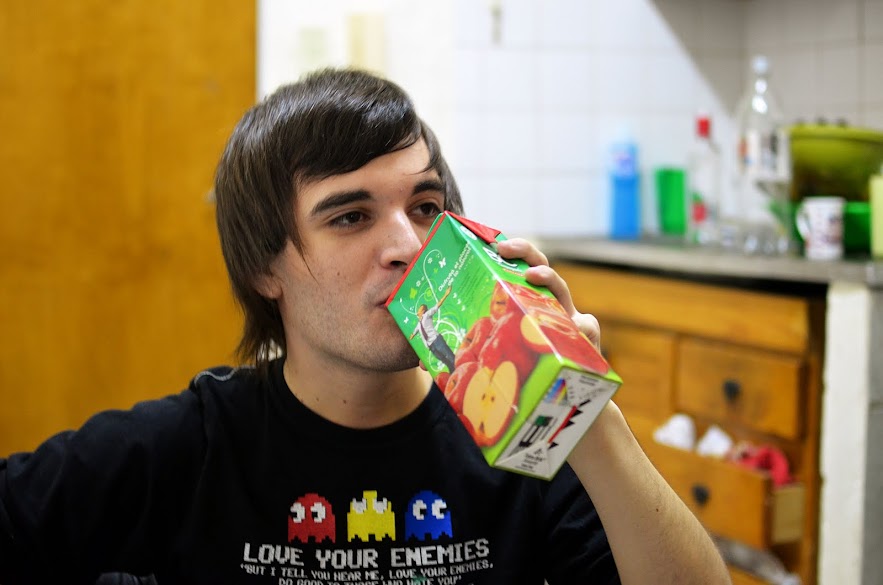 Then Damian and I slept till about 5 p.m. Whoops. We ordered pizza, which apparently doesn’t always come in the typical round, pie shape. But it was delicious, especially the one on the left in the photo below. 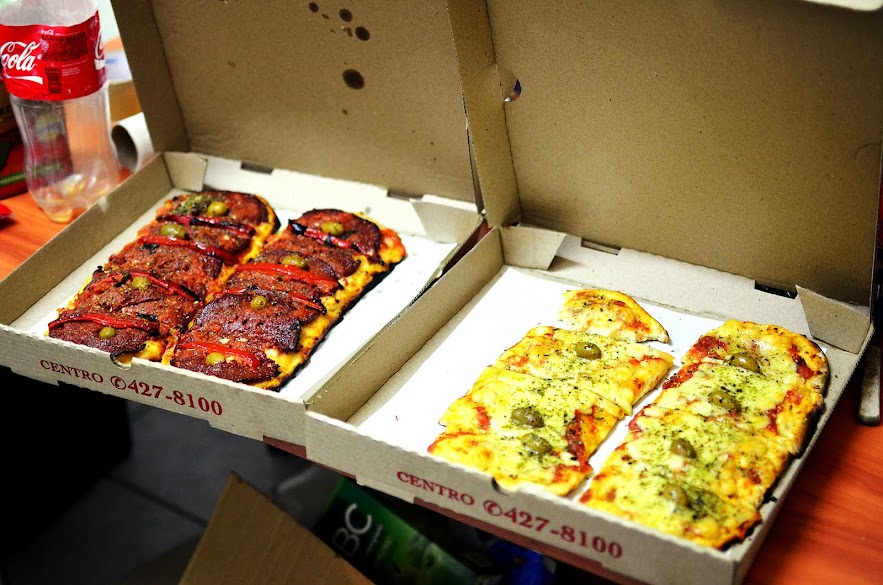 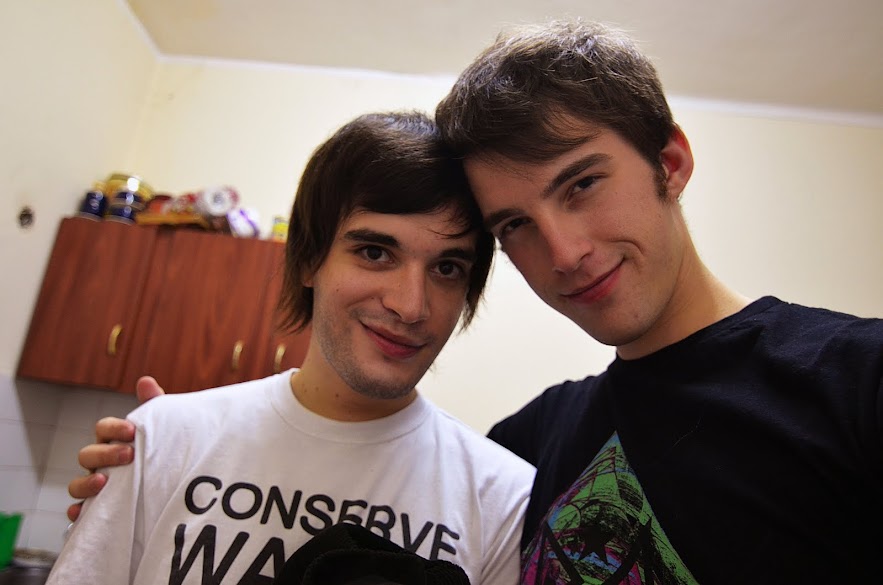 Going out to the gay club of La Plata 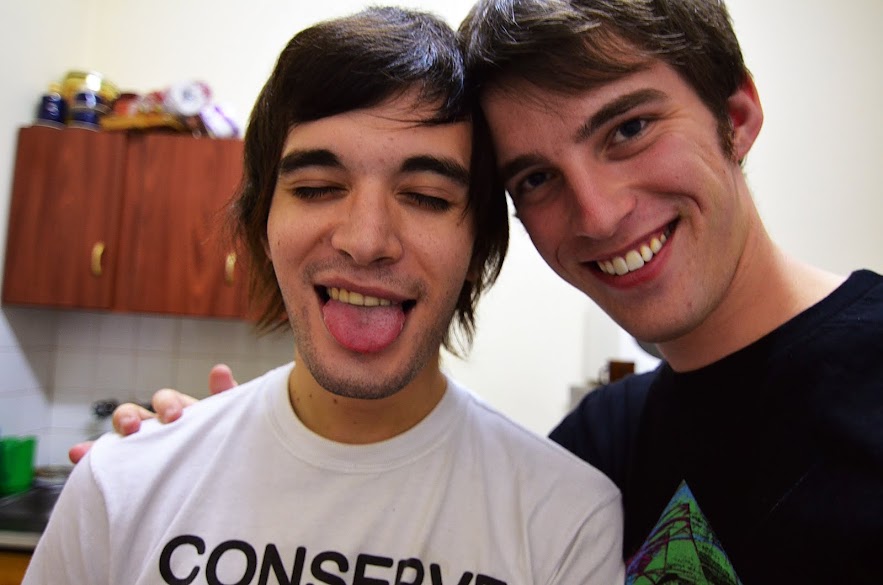 The above photo was at 3:36 a.m. Then we went to La Plata’s only gay club, which I think is called Juana based on a Google search… anyway, I don’t remember a lot about that night. The club was smaller but decent, and I got to meet this old woman who apparently loves Damian. I was also apparently eying some guy with a bit of a faux hawk most of the night. Then we came home around 6 or 7 a.m., and slept into the afternoon, as usual. 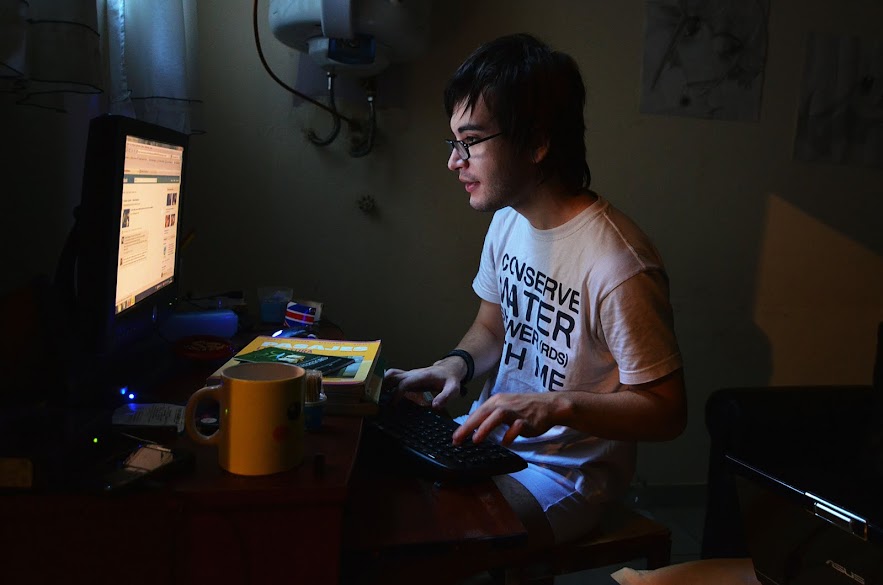 Then it was Saturday night, the night of Damian’s coworker Irina’s 27th birthday party in La Plata. She decided she wanted everyone to wear a mask, so at 9 p.m., Damian and I set out to buy a mask. Only everywhere that might sell masks was closed. So we had to make something from an old shirt. 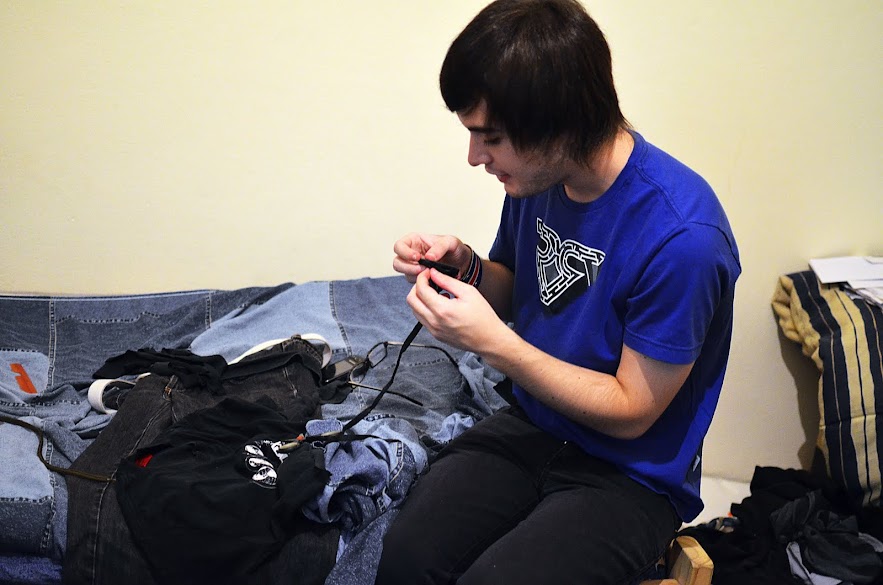 Damian works on his pirate patch for a mask party, hosted by his coworker Irina for her 27th birthday.

We ate at Subway with Matias, then headed to Damian’s house to drink before going to Irina’s around 12:30 or 1 a.m. 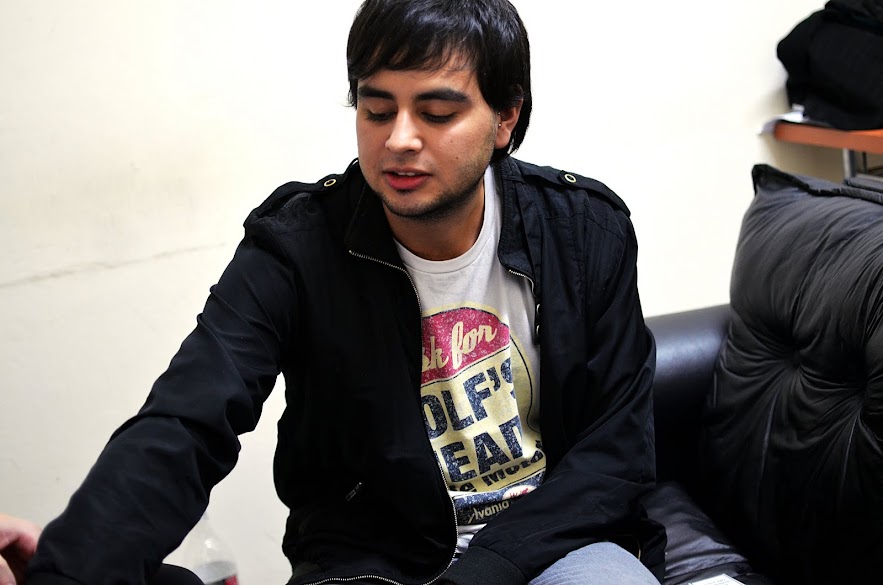 This is Matius. He is straight and he does not like his picture being taken.

At first the party was a bit awkward for me. The crowd was a mixture of people who work at Globant, a video game testing company, and friends. The people who work at Globant mostly spoke English, and most of the rest didn’t. But of course everyone was speaking Spanish, so I had no idea who to talk to, as my Spanish still isn’t good enough for general conversation. I hung around Damian and Matius for the first hour or two, but then as people got drunker, I ended up wandering off. I guess I did all right conversing in a combination of English and Spanish. And I got some Facebook friend requests the next day. Haha.

Eventually people started to leave, around 7 a.m. I don’t remember the end of the party, but I guess it involved an incident where Damian threw Irina’s clock out the window, and apparently I got upset about something and was sitting alone on the stairs for a while. I have no idea. At any rate, we walked home in the glorious daylight to crash at Damian’s for most of the day again. 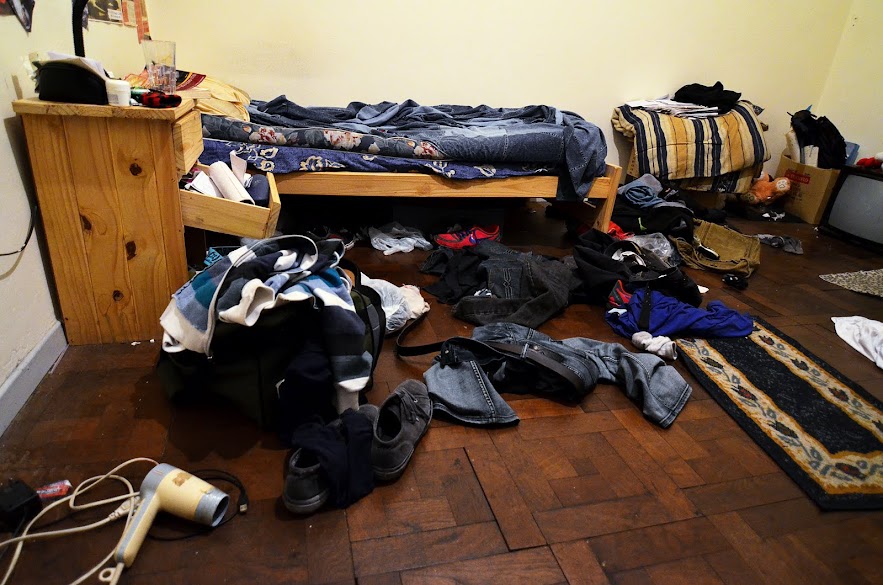 The room of Damian after I moved in...

I stayed over Sunday night (I think we watched Skins?), and went back to Buenos Aires Monday. This time I went to stay with a friend, Dani, I had made the week before. He lives in the Capital Federal area, closer to life. But more about that to come!

This entry was posted by Charlie Gorichanaz on March 29, 2011 at 3:58 pm, and is filed under Uncategorized. Follow any responses to this post through RSS 2.0.You can leave a response or trackback from your own site.