The last few days have been great! I met a bunch of new people and am getting a bit better at the buses. I also was told I’m the first American ever to have stayed in Lanús, which is apparently not a tourist destination. But it’s been fine!

Wednesday I took a bus to Palermo to meet another Internet friend. I told him I hadn’t yet eaten at a sit down restaurant, so that’s what we did! The place he wanted to go to, Las Cabras, was about 10 or 20 blocks from his house, so we walked. On the way, we passed many restaurants, most of which were pretty empty that Wednesday night. Then, we got to Las Cabras. And it was packed. And there was an hourlong wait. So I knew it must be good.

We put his name down and walked around a bit. 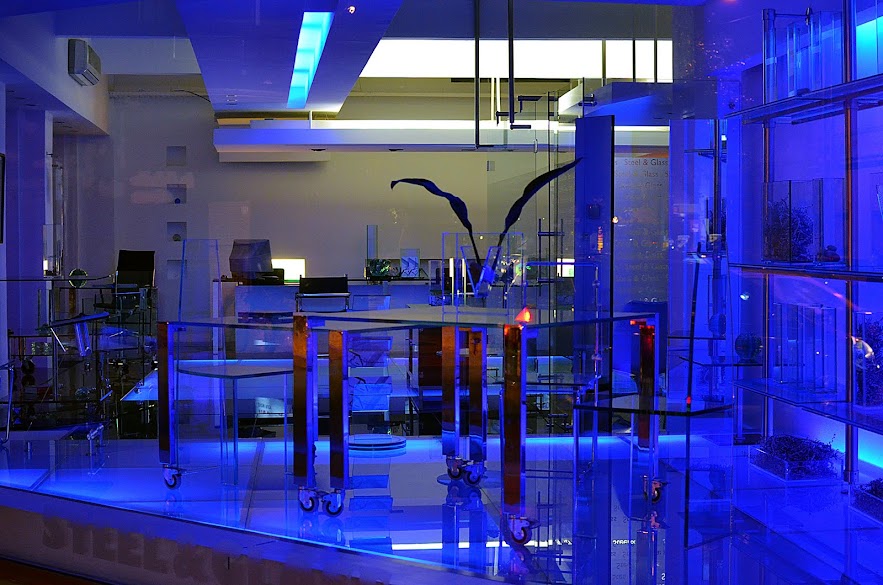 A steel and glass showroom in Palermo, Buenos Aires

After less than an hour, Juan’s name was called, and we sat down. First they brought a slab with two pieces of bread on it. But nobody brought water, as I was accustomed to. Eventually our waiter made it to our table, gave us menus, and we figured out what to order. Juan suggested I get the big thing on the side, called something like “La gran Cabra.” He said it was like my first choice but with more stuff. And more stuff it had. Fries topped with a sunny side up egg, a delicious baked cheese thing, sweet potatoes, white rice, a large onion (what?) and a sizable slab of meat. Delicious!

Water, however, is not provided for free. You have to order it, and it’s about as much as soda. And the sodas are quite small. I had to order two, and I was still really thirsty. Apparently this is the norm. Tipping, though, is a bit different. Apparently 10 percent or less is standard. 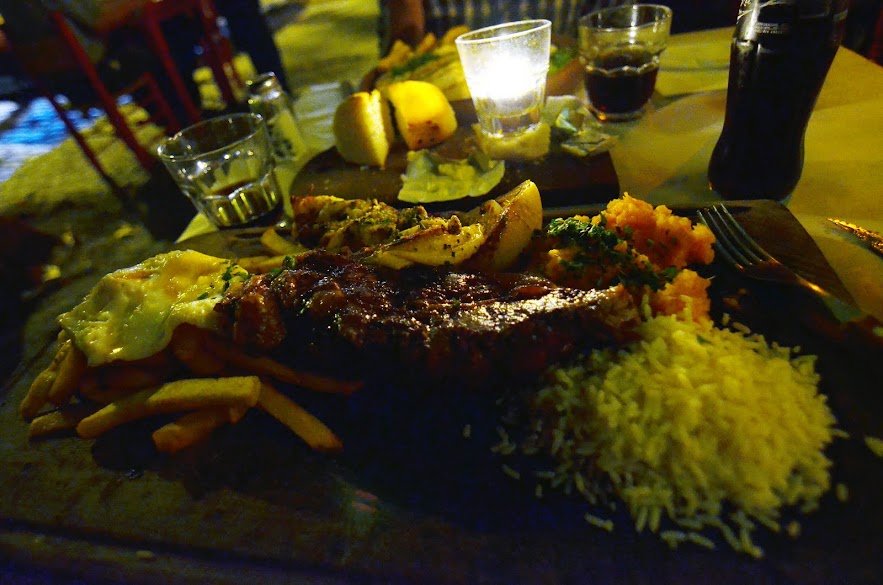 My meal at Las Cabras in Palermo, Buenos Aires. It cost 55 pesos ($13.75) for the food, including sales tax. Tipping is around 10 percent or less. The only down side was you do not get free water. You can buy water or sodas in small bottles for about 10 pesos a serving. But I guess drinks are overpriced in U.S. restaurants, too, usually. Except the water thing.

Then Thursday I went back to Juan’s to join his friend Shina and another girl, Grace, for a Buenos Aires Pub Crawl event for St. Patrick’s day. There were 300 people in the group, and it was a lot of fun! We ended up not even paying the 100 pesos, so that was nice, too. 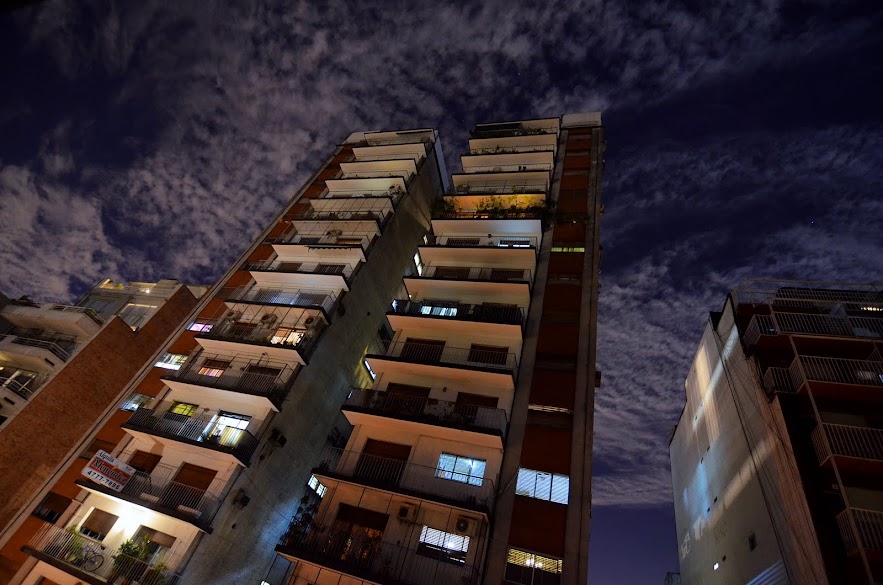 A nighttime view from the balcony of Roberto 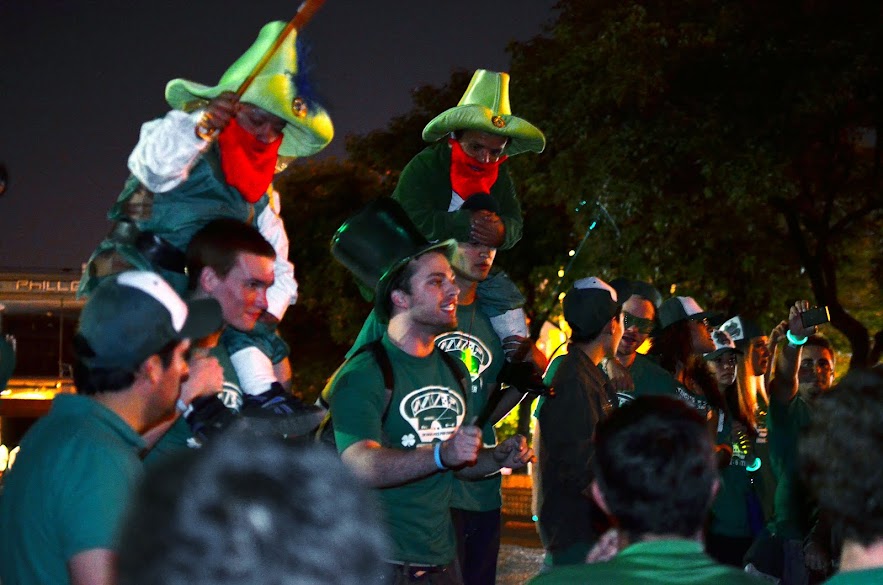 300 people gathered in a plaza before heading out for the Buenos Aires Pub Crawl for the day of St. Patrick! 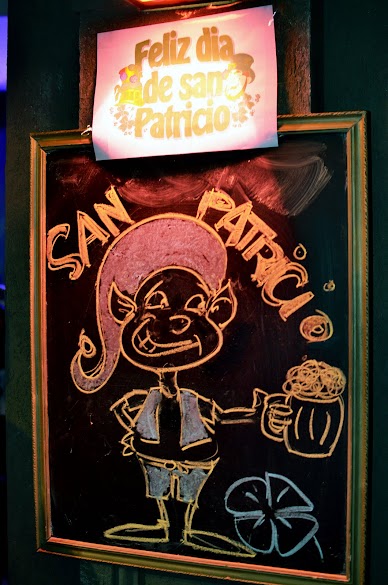 San Patricio, as they say. 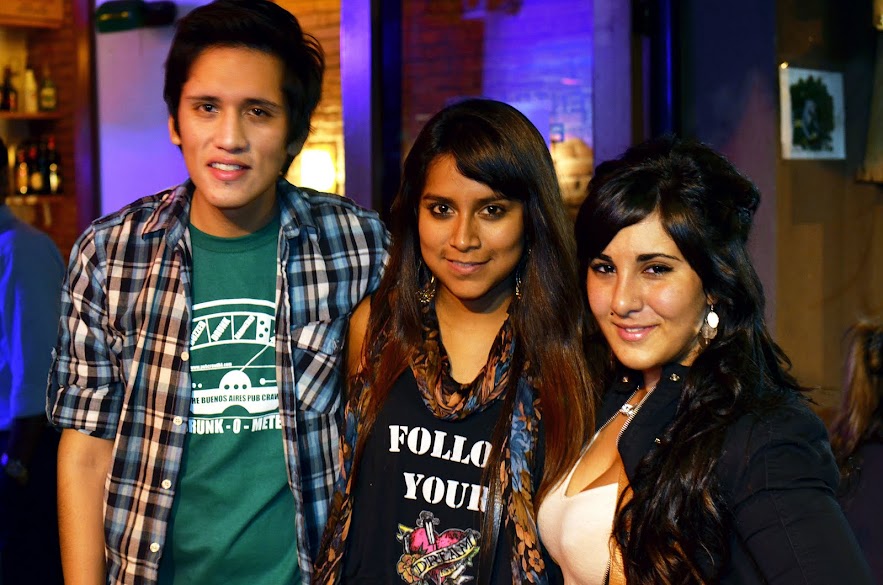 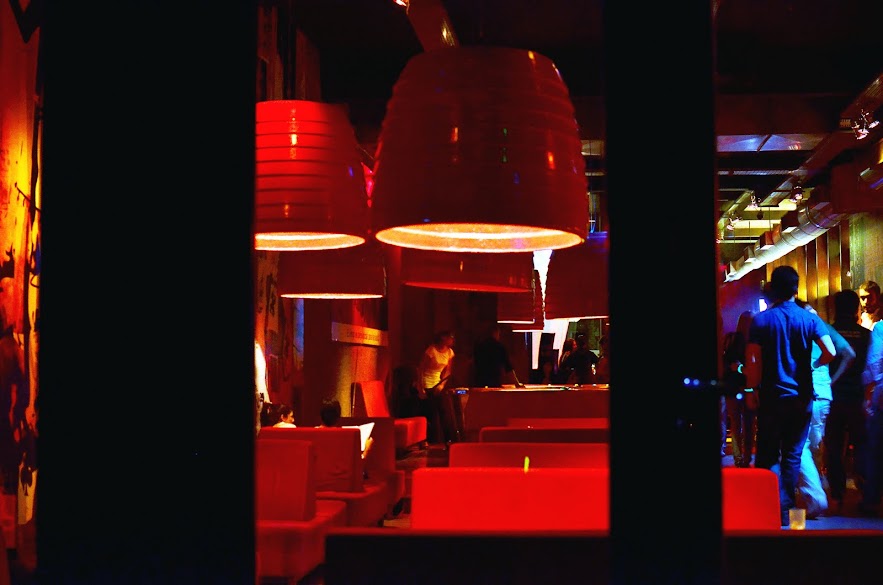 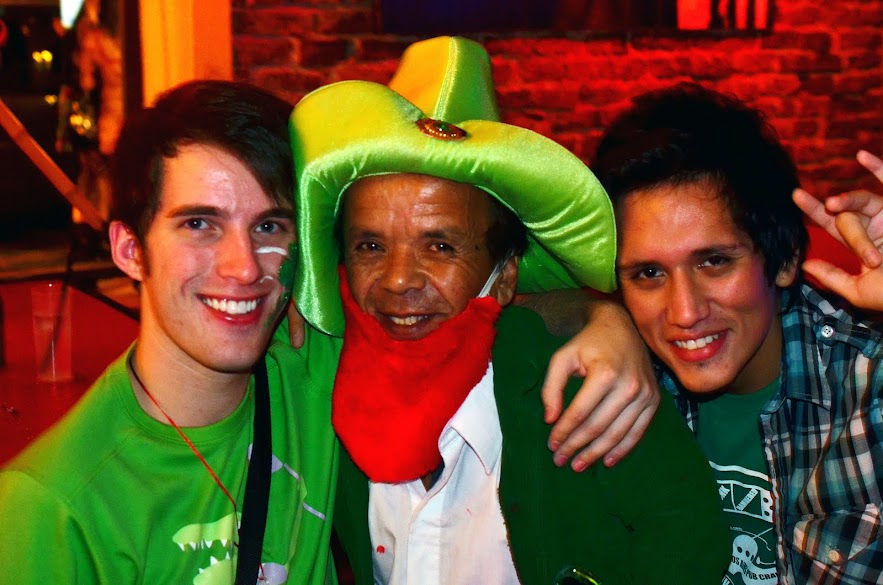 They had small people, I mean, leprechauns! 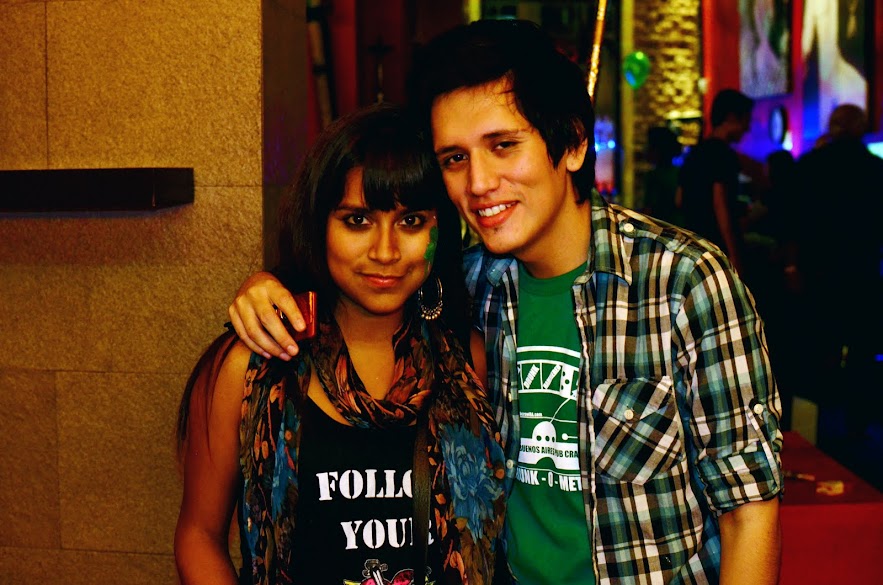 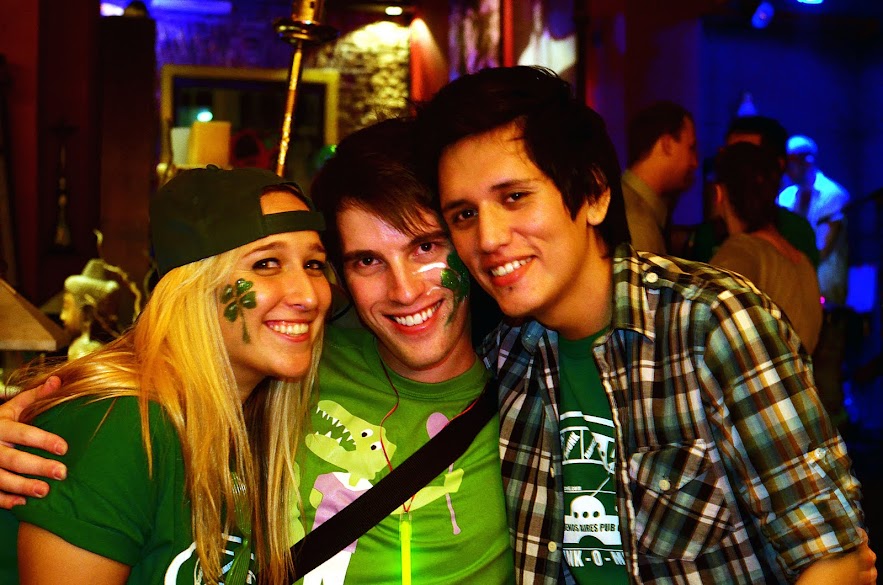 One of the event coordinators I think 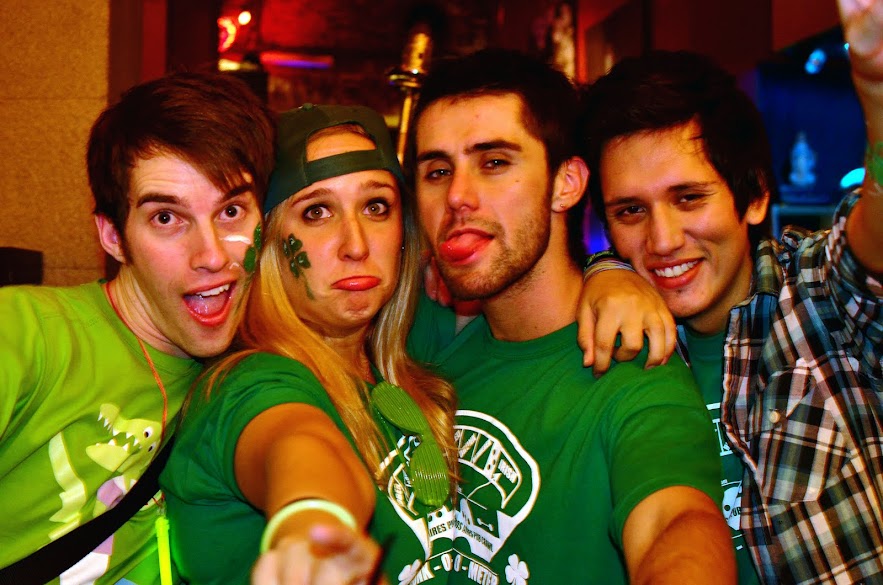 Yeah, I do not know. I do not remember this. But that guy is cute. 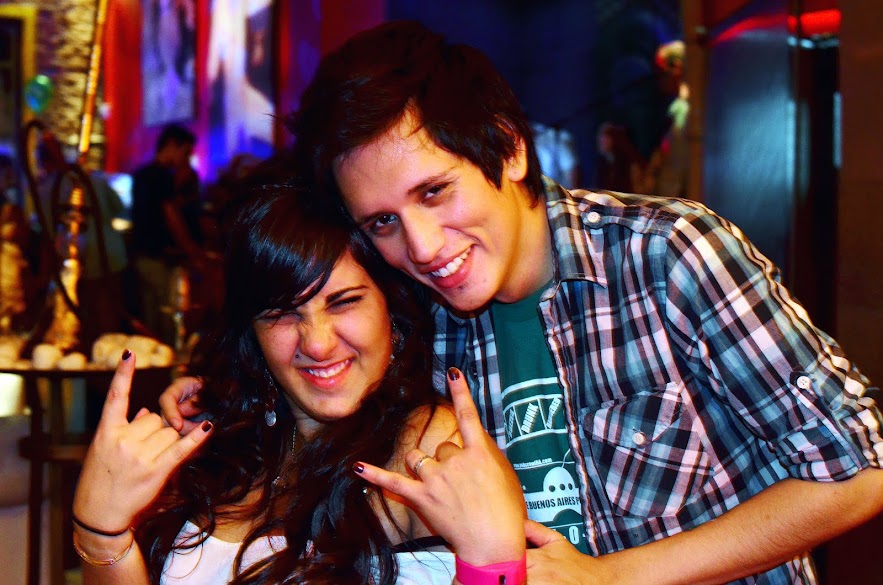 This entry was posted by Charlie Gorichanaz on March 19, 2011 at 3:33 pm, and is filed under Uncategorized. Follow any responses to this post through RSS 2.0.You can leave a response or trackback from your own site.