Why can’t we go out? No hay monedas!

So far I’ve gotten cash by bringing paper dollars from the United States and converting them to Argentine pesos at the airport, getting pesos from an ATM and using my Chase Amazon Visa and my American Express Clear cards. All the methods, except perhaps the ATMs, produce basically the same results, but clearly not all are of equal convenience.

I assumed converting cash would yield the best results, and thus brought enough cash to survive the month; now I know that wasn’t necessary. I figured I might need at most 4000 pesos for the month, which is about 1000 U.S. dollars.

As you can see in the below chart:

So the best combination is to bring some cash and exchange it at the airport, and then use the Chase Amazon Visa as much as possible. One downside to using a credit card is many places will require your passport, and sometimes it takes a few extra minutes to process.

Note: The actual exchange rate (from OANDA.com) changed a fraction of a percent over the days this data covers, so I neglected that in the calculations. 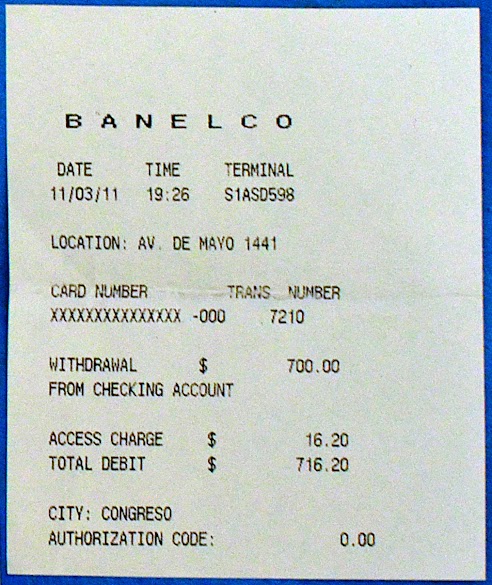 Receipt from an ATM near the capitol 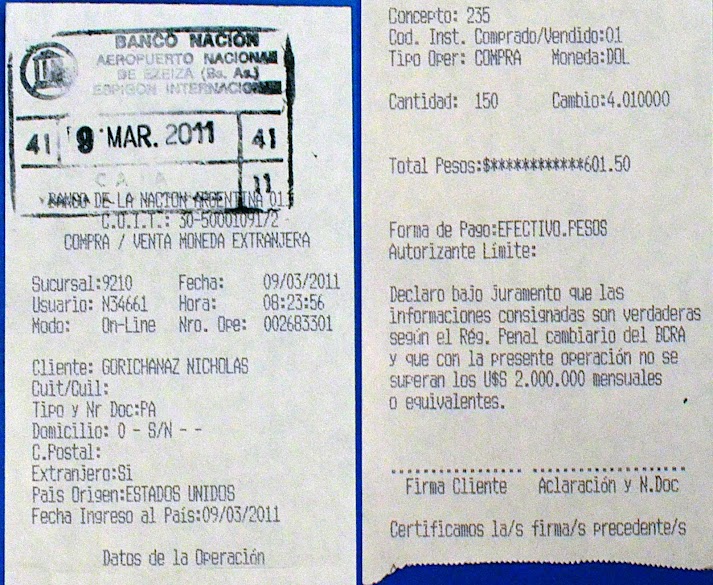 Receipt from changing currency at the airport

So now you have tons of paper money. Great! But unfortunately your paper money is useless when it comes to getting around Buenos Aires. The buses are all extremely cheap, but they require coins, called monedas. Argentina in recent years has undergone a huge shortage in supply of monedas despite record high production of the coins. Slate mentioned in “Inside the world’s most annoying economic crisis” the bus companies are a culprit, as a hoard of 5 million pesos’ worth of coins was found in one company’s warehouse. The Argentina Independent put together a bunch of photos of the shortage in action: businesses everywhere have signs declaring they do not have any of the coins.

I get the feeling this is finally changing, but I’ll get to that later.

Anyway, getting back home Friday night was a challenge. Fernando and I didn’t have any coins left, so we had to go store to store asking for the coins. Nobody would give us any, so we finally decided to make some strategic purchases such that we would get the correct change back so we could take the bus. This worked for us, though I’ve read online many tales of stores refusing to give coins even as change for purchases. Again, I think it’s getting better, but slowly.

So we were finally able to get home, but then I had the same problem. I was supposed to go to meet a new friend and go out to this huge gay dance party at some club. But Fernando lives in a “smaller” area of Buenos Aires, where there aren’t any all night stores and barely any taxis. So I wasn’t able to go out because I didn’t have 1.25 pesos, a bit more than 25 cents in U.S. currency. How dumb.

But Monday morning, while trying to buy a ticket for the train back home, I inadvertently waited in the wrong line… and ended up obtaining 20 of the prized peso coins. So it is possible to get them, you just have to wait 30 minutes in a line at the train station. And maybe that’s not always possible, but for now I am set at least.

Then Saturday I ended up falling asleep in the evening, and Fernando didn’t wake me up to get ready to go to his friend’s drag performance… and I ended up just sleeping and doing nothing. Oh, well… I’ll do better this weekend, I promise. 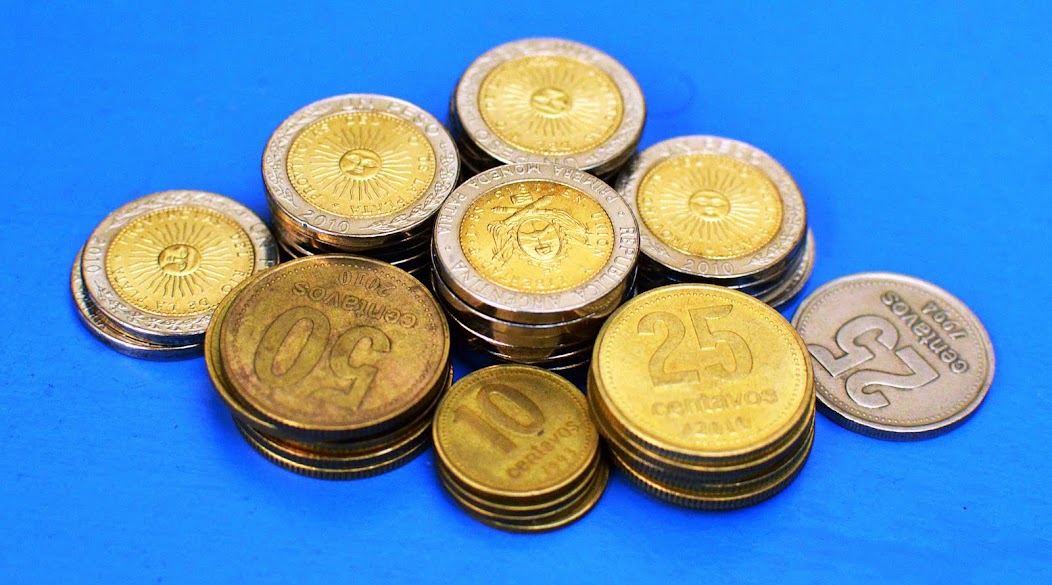 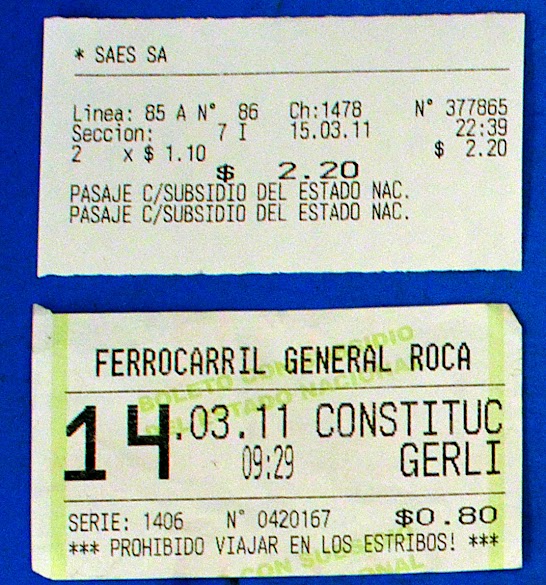 Receipts from the bus and the train... fare for pretty much all public transit is about a peso, or 25 cents in U.S. currency.

To help alleviate the monedas problem, the government started a stored money card program. Currently you can use the cards on subways and some buses, but apparently more and more buses will support it in the coming months. I’ve seen it on about half the buses I tried so far, but only half the equipped buses had machines that actually worked. So for now, I need to rely on monedas for the buses. Good thing I accidentally got a bunch at the train station. 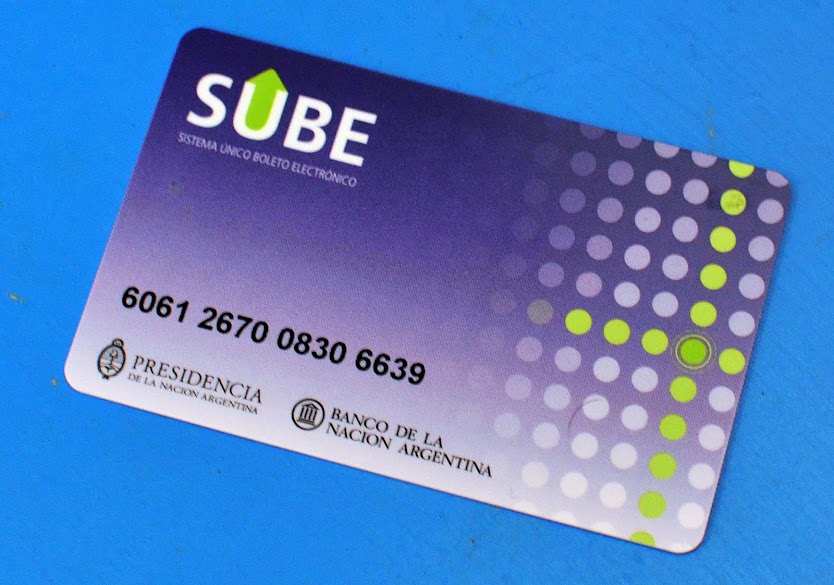 A stored money card for use on the subway and many buses. This is a SUBE card, for Sistema Único Boleto Electrónico, and the other similar card is called Monedero.