« What I like and hate about the Palm Pre
Thanks for the rifles, Madison »

I had the pleasure of attending the Madison Civics Club luncheon Saturday to see the influential White House press correspondent Helen Thomas speak. Members of The Badger Herald and The Daily Cardinal were invited, and we got to meet Ms. Thomas at a small reception before the luncheon began. She took some questions there, and then gave a speech and took more questions after lunch. 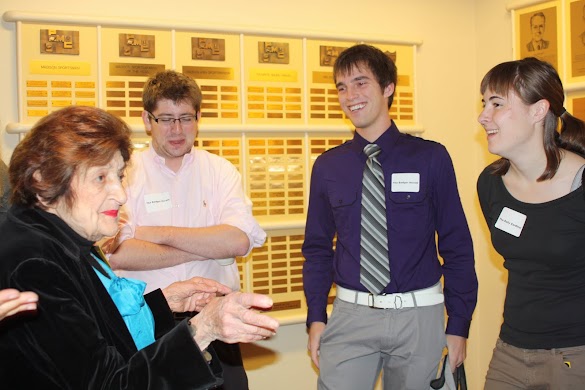 Helen Thomas with Kevin B, me and The Daily Cardinal's Emma R

In case you don’t know who she is, here are two clips from a few years ago:

And here’s one from a few days ago:

I found it remarkable how alert, intelligent and perceptive she is, especially considering she is about 90 years old! She kept saying journalism is the best career because you learn every day, and she definitely exemplifies the result.

During her speech, she gave some insights I thought were particularly striking:

I should be able to post some photographs of us with her when I get them.

I might write about the crowd and Madison’s elite later.

This entry was posted by Charlie Gorichanaz on October 4, 2009 at 6:04 am, and is filed under Personal. Follow any responses to this post through RSS 2.0.You can leave a response or trackback from your own site.