What a weekend! I had been hoping to get to Chicago for New Year’s, but it was unclear I’d have anyone to stay with or even go out with until the late afternoon New Year’s eve. I was unsuccessful in locating a friend to crash with, after asking a dozen people almost, so it was looking like I wouldn’t do much.

But then! A recent friend I met online (and have yet to meet in person) through Twitter I think, Blair, was so kind as to offer to let me stay at his vacant apartment if I drove to Janesville to get the key. I planned to do that, and hang out with him at least a while, but… I was running extremely late as always. I didn’t start driving till after 8 p.m., and shortly after turning toward Janesville, I realized I might not make it by midnight. So I decided to forgo getting the key and drive straight to Chicago, crossing my fingers I’d find somewhere to stay other than my mom’s van.

I ended up making it to Blair’s apartment (to park) before 10, so I had to wait in the car for about an hour while my friends from Madison pregamed and took the train down to Boystown. I stupidly completely forgot I had Twitter friends having a party nearby, and another friend from Facebook who was also at a nearby gathering. Oh, well, my mind is getting old I guess. I got some quality Pretty Lights listening done at least.

Then I got the text from Justin, informing me they were about to enter (thanks for the warning) the club Spin! I walked the two blocks to the club, got in and sought out familiar faces. 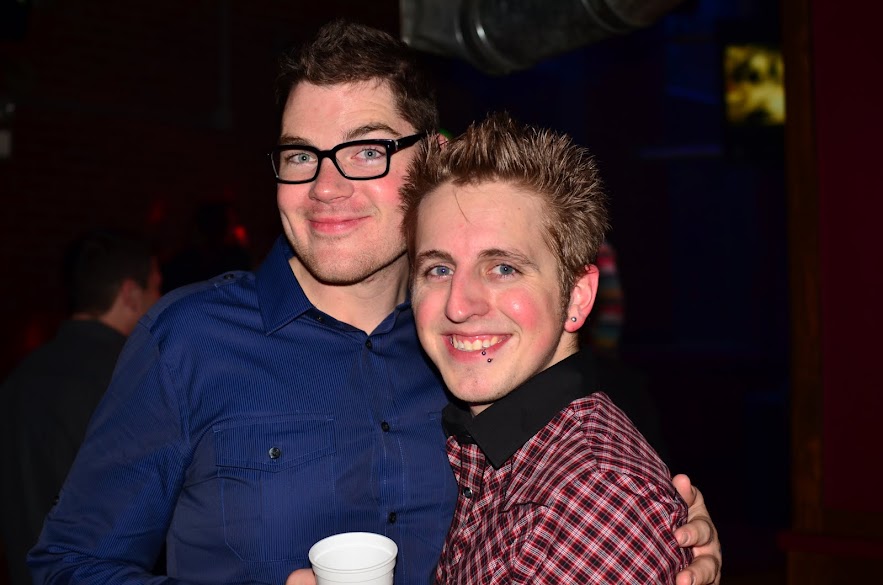 Justin was with his friend Trent, who seemed delightful. 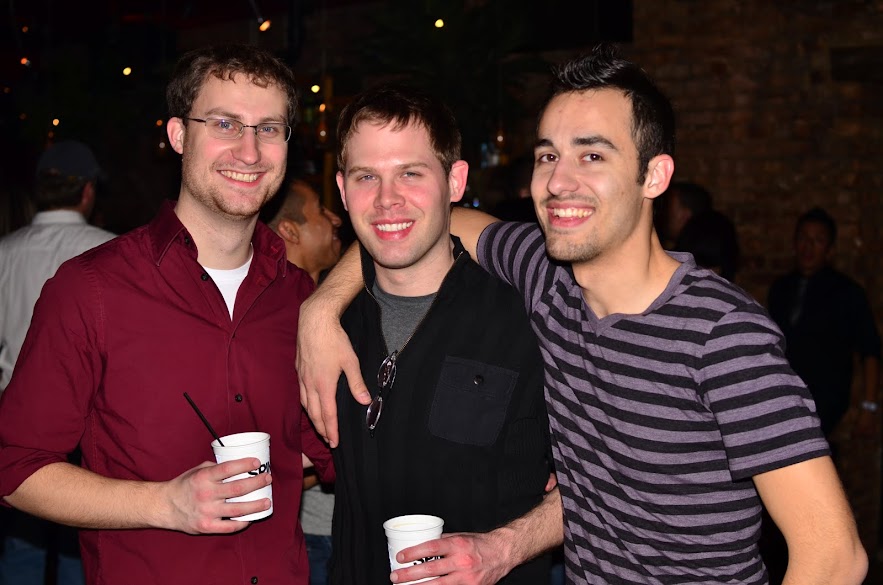 Then of course the standard boys were there…

First I ordered a double rum and diet. This ended up costing $14, and instead of getting a double, I got two singles. I’m not sure if they were out of larger cups or what, but I was told a single cost $6.50, so ordering a double wasn’t the best idea. Especially since I was also trying to carry my camera. 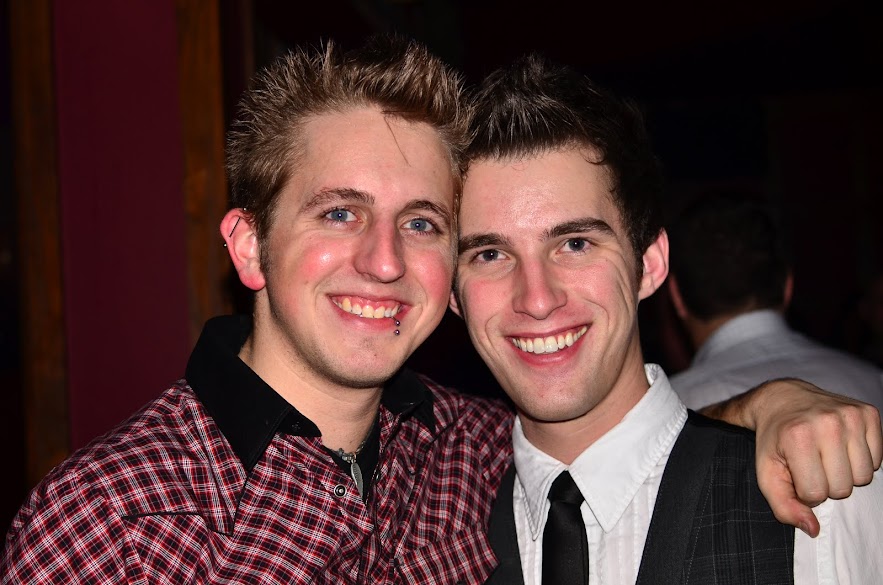 Justin and me with my huge pupils 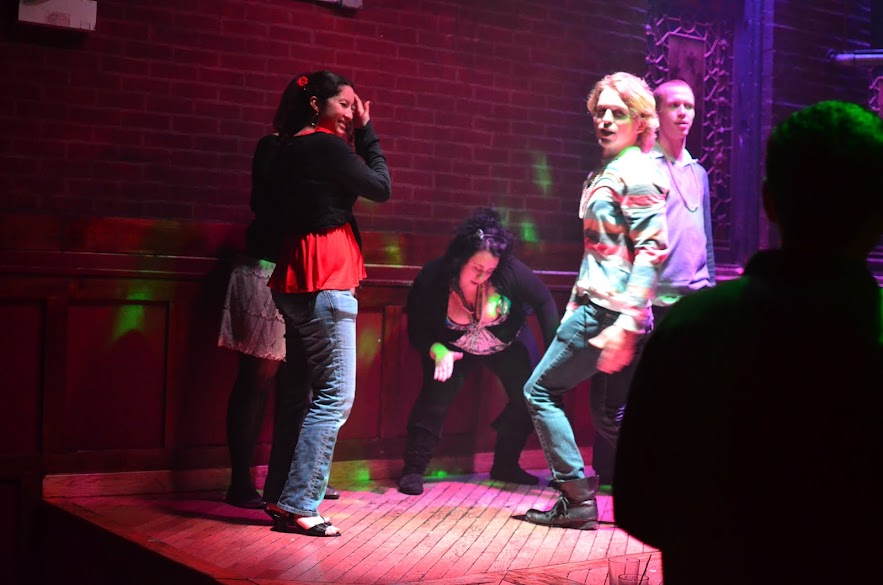 This was just a test shot to see if there was enough light. 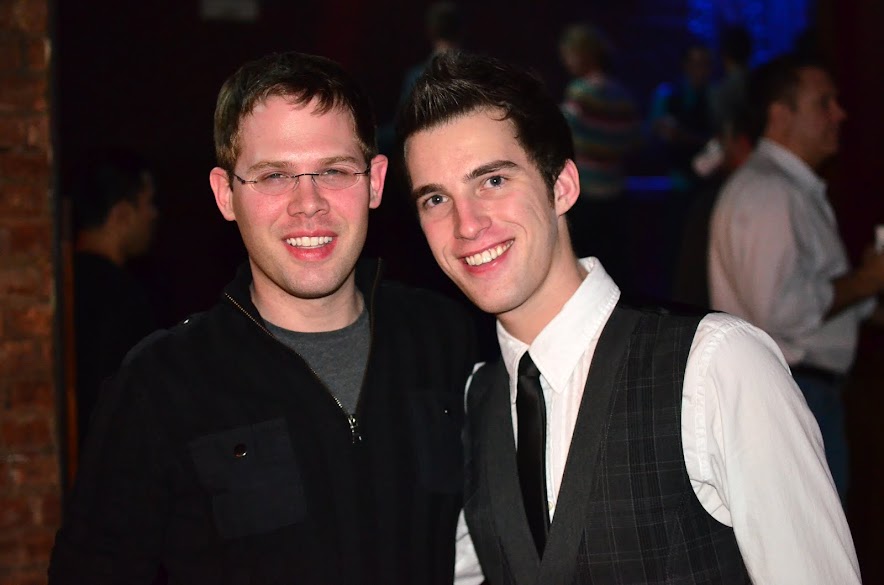 We stayed at Spin for midnight, at which time bartenders distributed plastic champagne glasses to everyone in anticipation of 2011. It was nice, though I somehow missed getting one. But of course I had my drink. 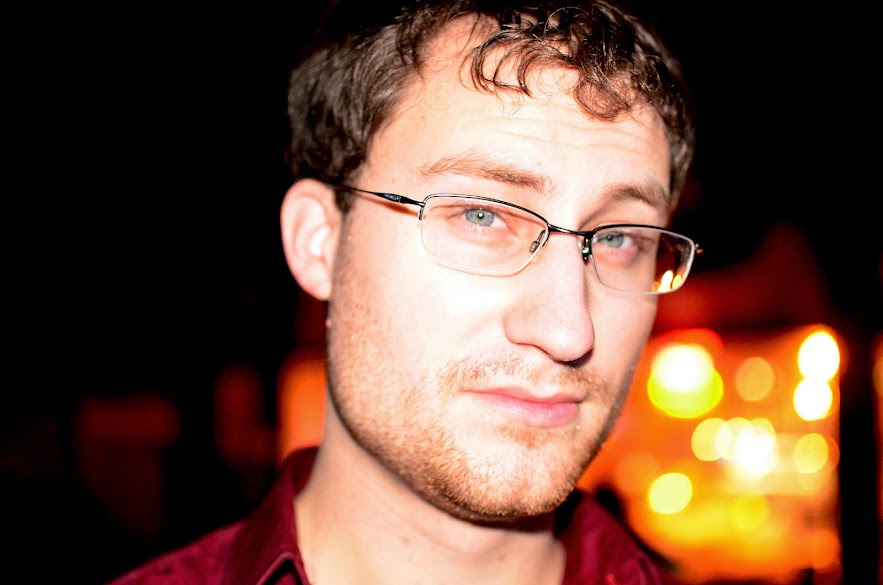 This was a mistake (not Erik), but I like it.

We eventually left. I wanted to leave sooner, especially after one of the bartenders aggravated me by passing me over in his rounds several times. I vowed to not give them any more of my money, and tried to get the group to move on. And we did, finally. I think I left before the group to get my coat from the car, and upon returning found Justin outside with Trent. Justin lost his credit card and was on the phone with his bank. Or he was trying, irate.

Then we went to a bar called The Closet. It’s apparently a lesbian bar, but it was packed with guys after Spin closed. I ran into some Milwaukee boys (Roy) who were… tipsy. Then eventually we parted ways for the night, and having completely forgotten to “work on” finding somewhere to stay, I headed back to my mom’s van and got to texting. Eventually I heard back from Jeff, a guy I met on Facebook. He said he was nearby, staying in a friend’s basement, and I should come over. So I did.

It was interesting… I arrived just in time to witness the cleanup from one of the remaining guests who decided to urinate on the window, inside. He was told to leave, and by 4:30 a.m. ish, the boys Andrew, Jt, Jeff and I went downstairs to go to sleep. ‘Twas rather awkward being on the couch snuggling while the other two lay separately feet away. But I got over it.

The next day, everyone had gone by the time I woke up Jeff and we slowly got ready to do something. By 4 p.m., we had finally showered and were thinking of joining Twitter friend Chris’s brunch extravaganza, but he wasn’t responding to texts (later found out he was using his phone as the music player…). After finding out Jeff smokes cigarettes (bleh) and getting a stern condom use warning from Bill (which is always appreciated), we contemplated food.

Bill offered to order pizza, but I suggested Jeff and I go eat somewhere. Need to discover new venues and check in on Foursquare, after all! Anyway, we walked around in the frigid weather and stumbled upon this funny little place called Yango’s Burgers and Stuff. A tip by Foursquare user Quirken pretty much summed it up: “Food not as good as you would expect, though staff grouchiness makes up for this.” 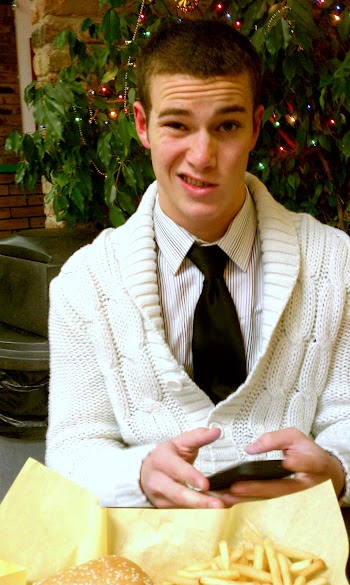 After breakfast/dinner, we attempted to go to T.J.Maxx, but it had just closed. So he walked me to my car, and then we parted.

I would not see him again unless I found something to occupy me till midnight while he attended his friend Jack’s housewarming party, which was to be too intimate of a gathering for my presence. So I sat in the car and warmed up while I waited to hear from Chris to see if his gathering was still going on.

Eventually he texted “dude you know the address just come over,” to which I was slightly off put. I tend to worry too much and over-analyze. Need to work on that. Anyway, once my over-analysis took into consideration Chris offered to let me stay at his place the previous night never having met me, and that he explicitly said “come over,” I decided to take a deep breath and head over. First I called, though, to make sure I wouldn’t freeze outside once I arrived. And I am surely glad I arrived. 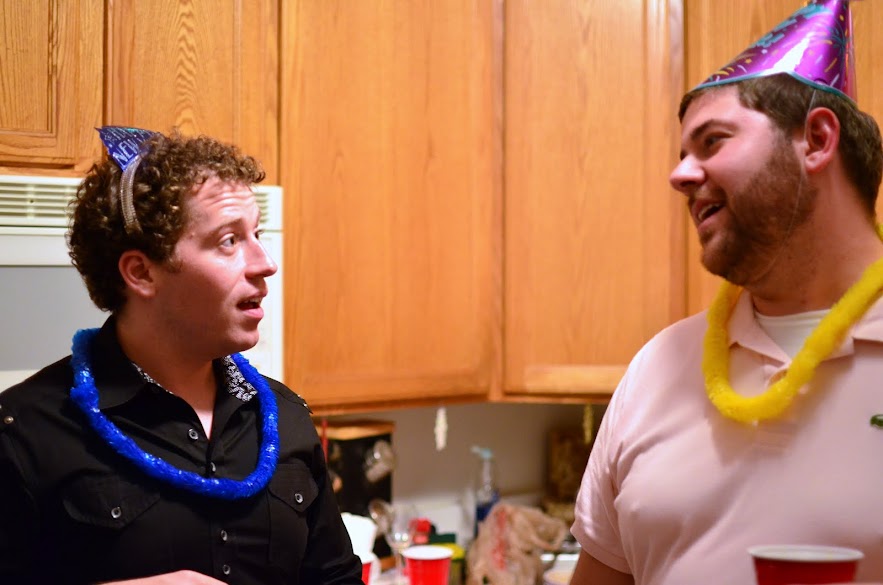 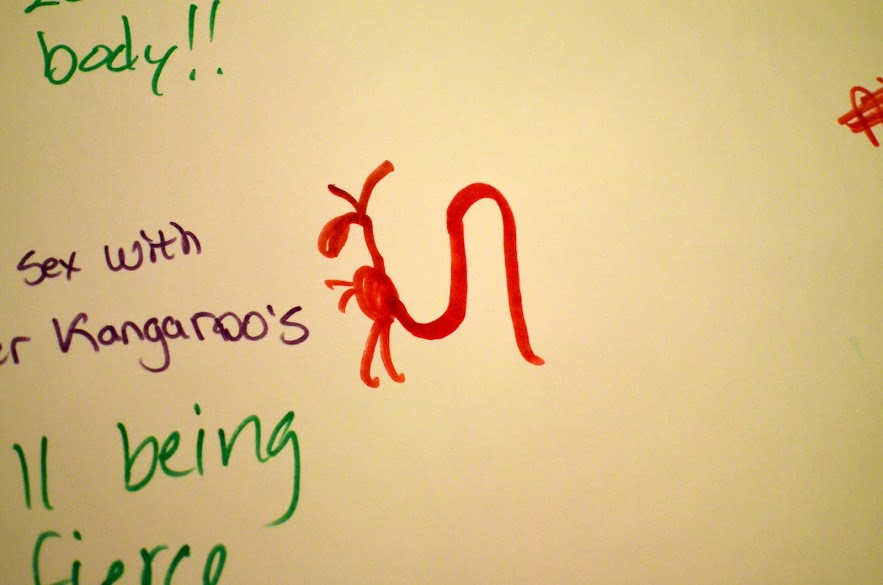 Jarrett&rsquot;s &rsquot;kangaroo&rsquot; after my pointing out they use their tails for support 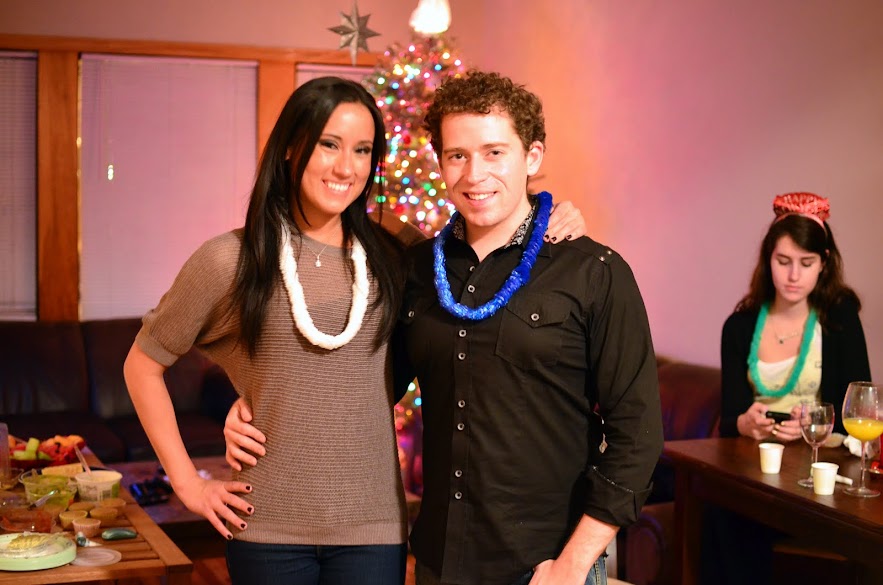 Ashley wanted to make sure these would end up on Facebook. :-)

At first, as always, it was slightly awkward. Everyone was gathered close around a table playing (a fizzling game of) Apples to Apples. I talked to Chris a bit and got out my orange juice and Svedka, as it seemed I was far behind the rest on that front. Slowly I inserted myself into the conversation, encountered no resistance and eventually became comfortable. They were a great group of people! 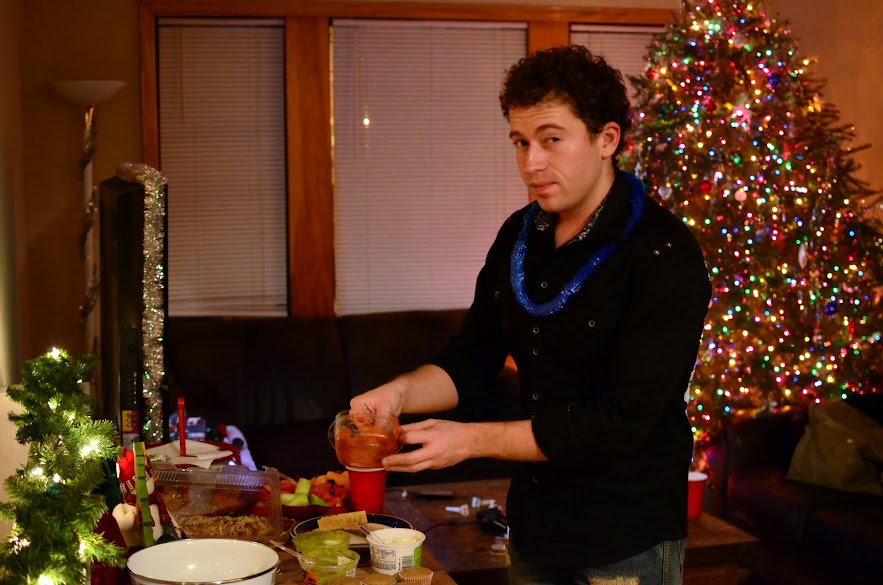 What a beautiful Chris(tmas tree)! 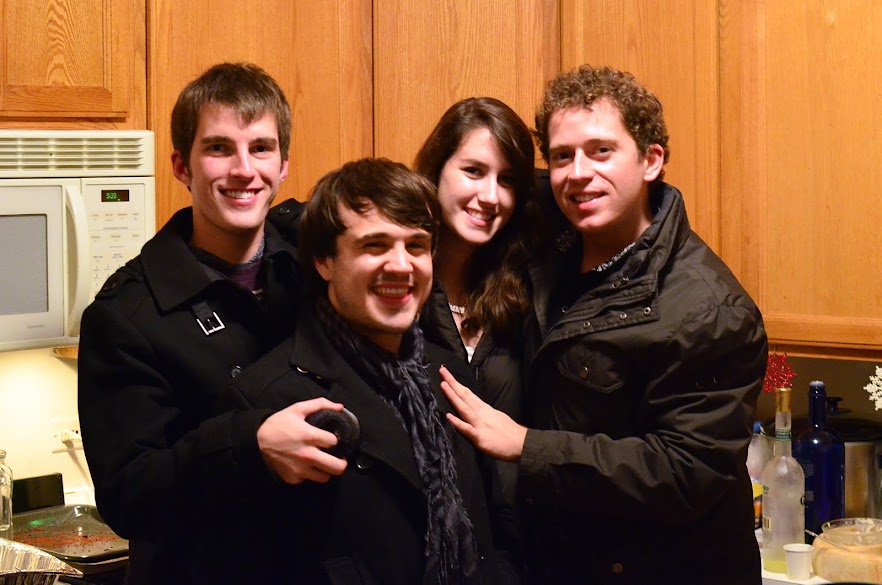 Thanks for taking the photo, Will!

We decided to join Chris’s boyfriend, K.C., at a restaurant for margaritas, so we headed out and called a taxi. Upon arrival at Cesar’s, we realized K.C. was at the other Cesar’s, which irritated Chris, but it turned out all right. We just walked to the other one, entered and found our party. We were at a large table with about a dozen people. Everyone was loud and belligerent, but it was glorious. Hopefully we didn’t annoy the staff; I’m sure they’re used to it. 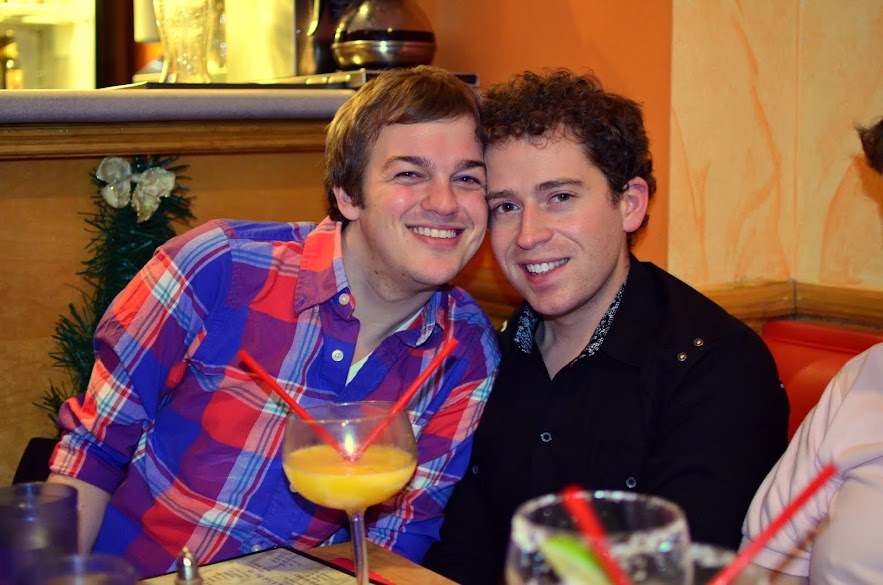 The boyfriends, K.C. and Chris 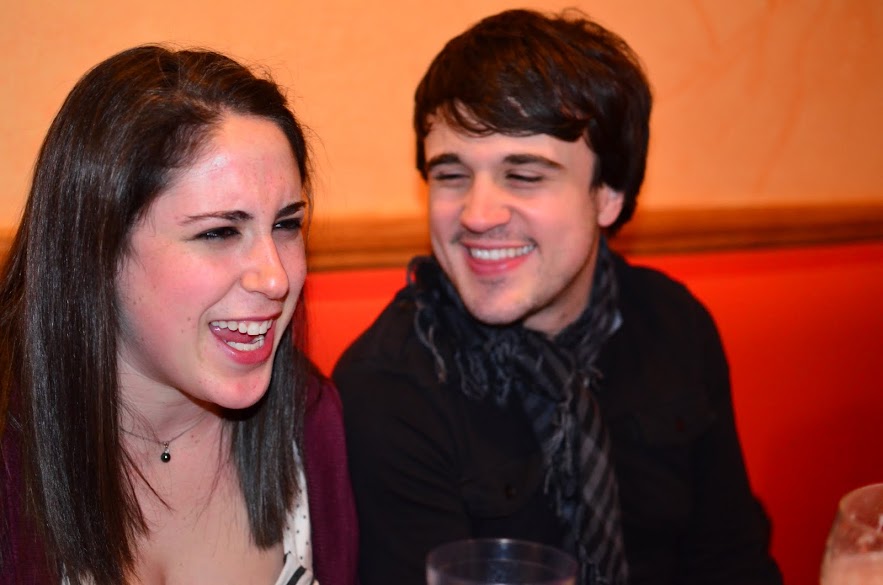 Samantha S. Derek: "You know I can see your face" 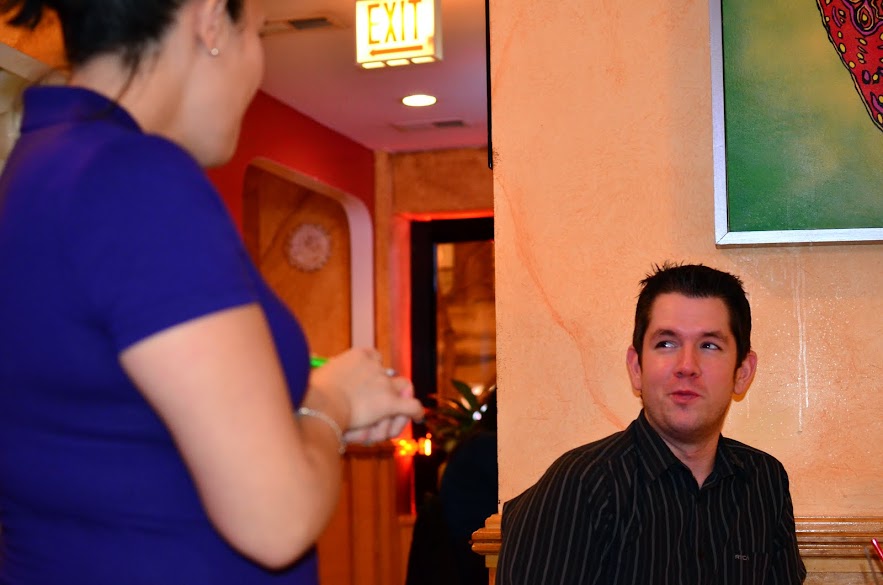 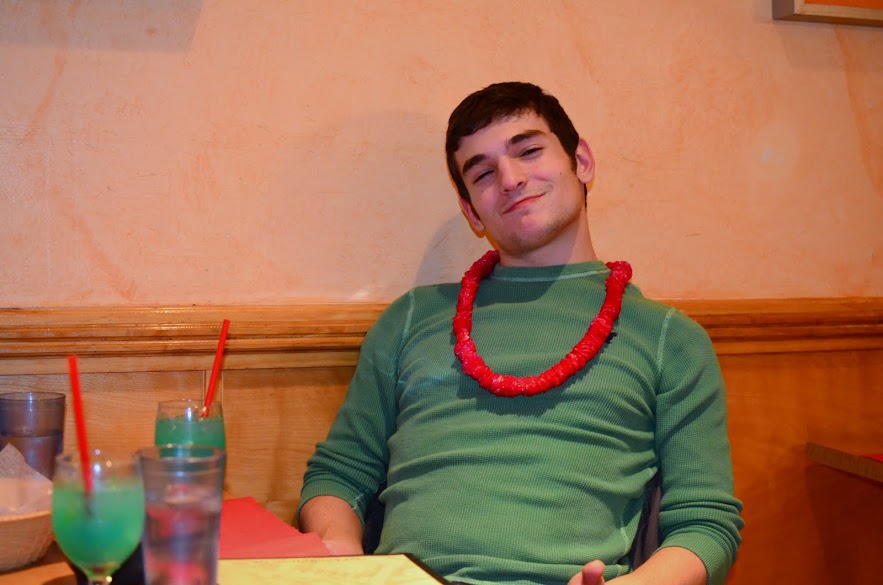 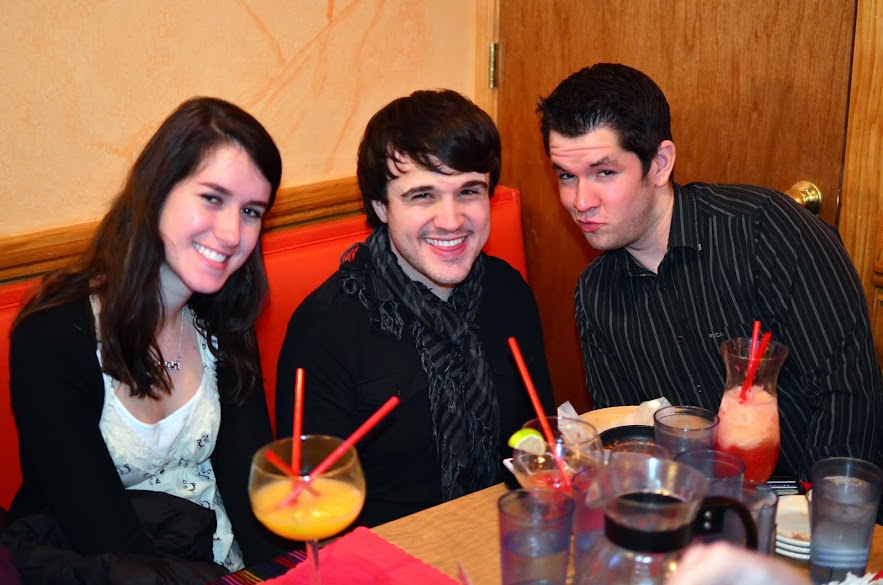 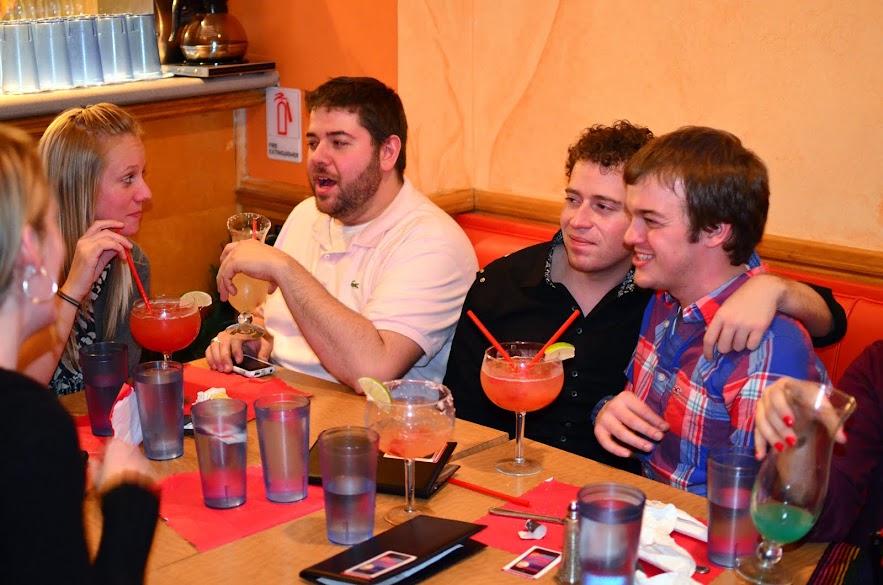 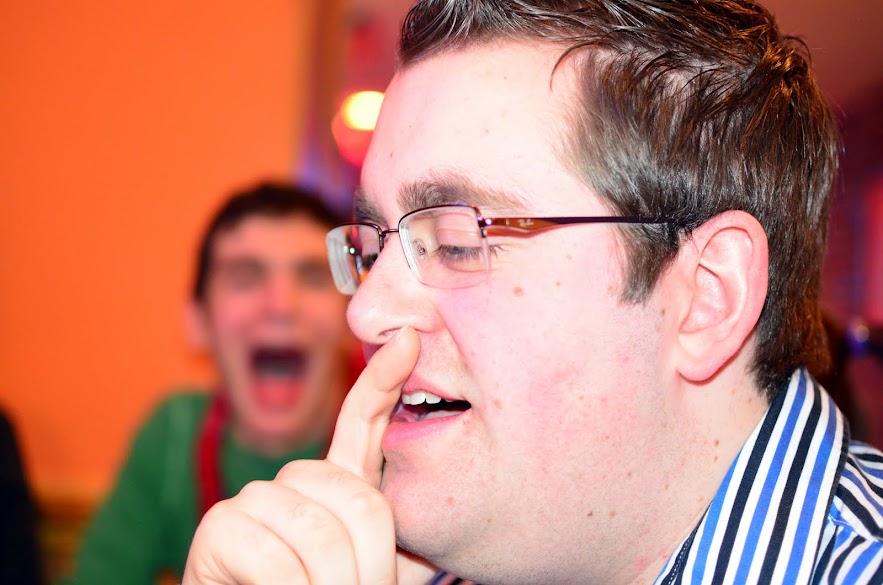 This is Derek P. He was great.

During our margarita drinking, I got a text from Jeff that sent things downhill. Apparently I was visibly distressed, as Jarrett noticed and texted me asking what was up. I should have been more upfront with Jeff, and didn’t find the strength to talk to him during our dinner at the hamburger place. I’m not sure whom he talked to, but it seems I’m not off the radar even in Chicago and after six months of rarely going out. 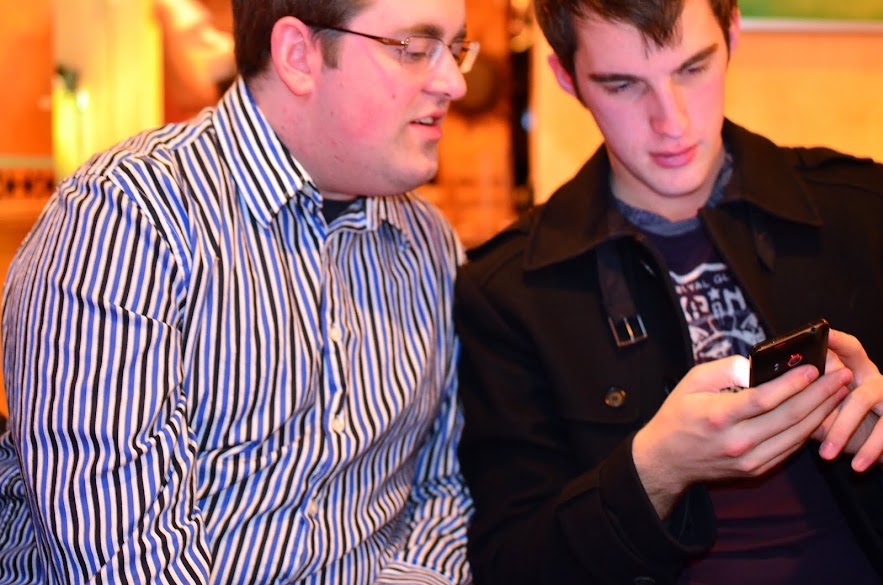 I’m also again realizing I should try to reign in my little heart. I have a ridiculous tendency to fall for people really quickly. I think it’s a combination of things. I know I’ll be going abroad soon, so the realistic me knows I’m not going to get in a long term relationship any time soon. But that seems to make me more willing to experiment emotionally. Ever since splitting with my first and only boyfriend Eric more than two years ago (almost three now?), especially during the past year and a half, I’ve been totally willing to take things as fast as the partner is willing. I’m often “intense” or perhaps aggressive when I meet a guy I like, but I don’t think that’s bad necessarily.

Upon meeting someone, I usually try to get to know him faster by breaking through his presentation. I say awkward things, I hold eye contact, I’m progressively informal and incredibly forward… I do this naturally, but it seems to serve well to unshield people. When I say something unexpected, and I can watch a guy react, watch him think… That’s what helps me know someone. I’m not sure if that makes any sense. It does in my head, but the point is I can get a sense of someone pretty fast, so if I like him, I let myself go… and if it ends in heartache, oh well.

I tell myself emotions let me know I’m alive, and feeling down once in a while is surely better than never experiencing anything. But when I find myself consistently being a creep and hurting, I obviously have to wonder. There’s got to be a balance, at least.

This entry was posted by Charlie Gorichanaz on January 3, 2011 at 12:09 am, and is filed under Personal. Follow any responses to this post through RSS 2.0.You can leave a response or trackback from your own site.